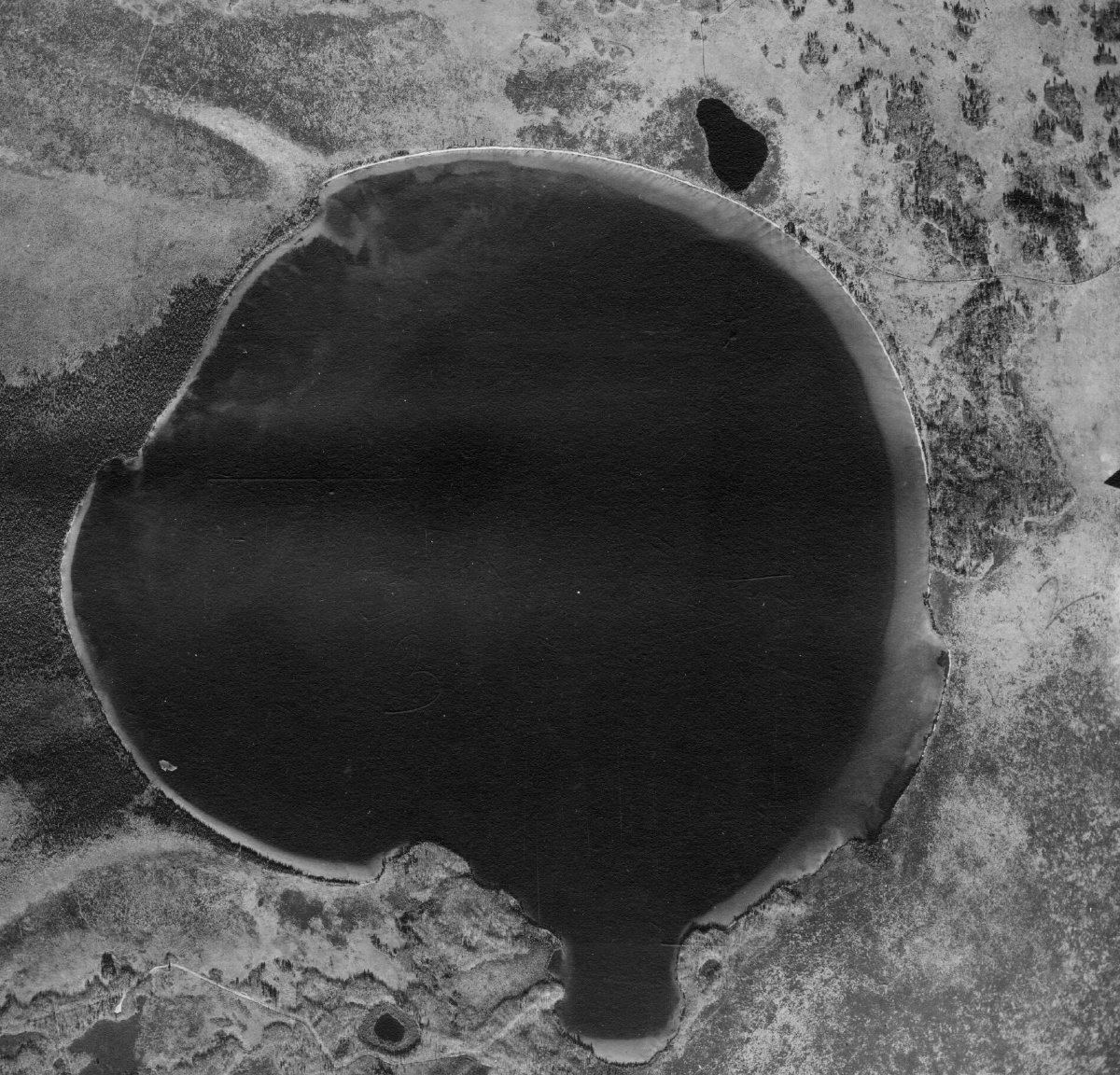 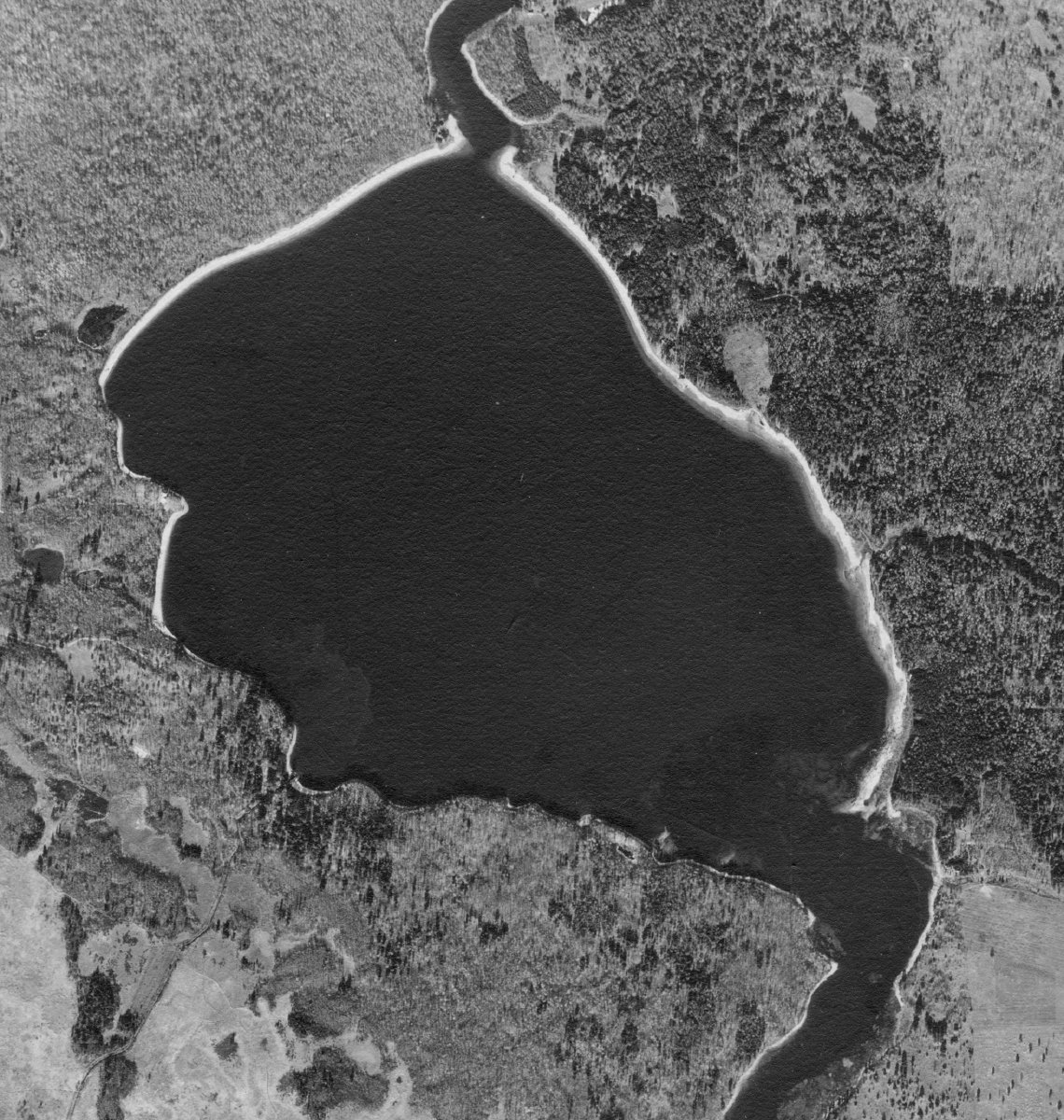 From the turn of the century through World War II very few summer residents had purchased property on Alder and Little Trout Lakes. Richard Southgate was one of the first to build an estate on this part of the Manitowish Chain in 1897.   He and Marvin Hughitt built an amazing canal from White Sand Lake in Lac du Flambeau to Alder Lake in Manitowish Waters.  The next summer residents to purchase property on Alder Lake were the Lutheran Aid Association, who sold to the Varney family from Chicago to create a summer camp along the western shore. 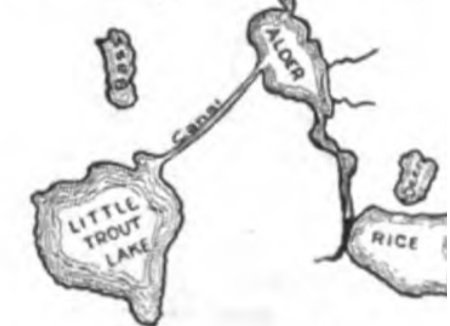 In 1897, Richard Southgate partnered with Marvin Hughitt to build a “one-of-a-kind” fisherman’s paradise. Creating an ambitious estate for fishing, using canals and the Chicago North Western Railroad for access, these men fashioned their personalized Northwoods community. R. H. Southgate’s canal leading to his property on Little Trout Lake; Marvin Hughitt president of the Chicago Northwestern Railroad was a partner in the canal construction. Southgate was an enterprising businessman who owned the Congress Hotel in Chicago among other properties.

The canals created a link between the isolated retreat on Little Trout Lake and the modern world. Southgate and his guests enjoyed the finest delicacies of the 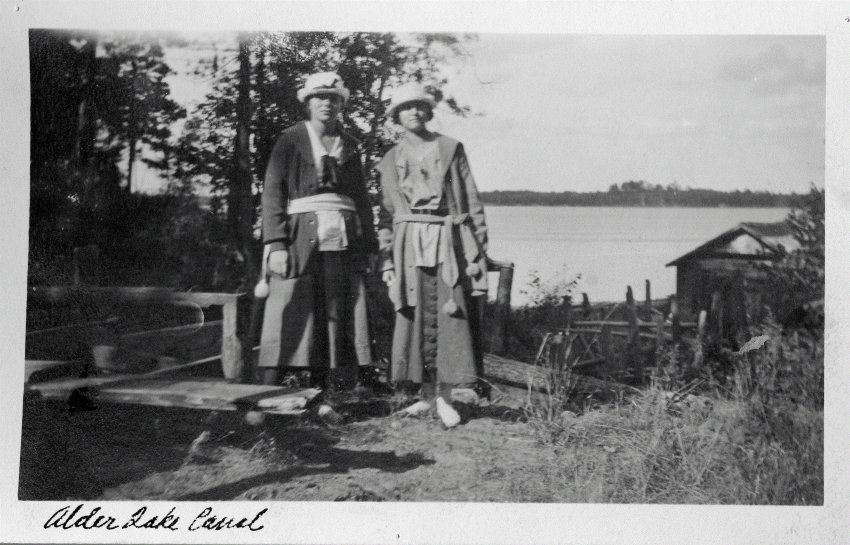 world, furniture and decorations from Southgate’s international travels, and modern conveniences like electricity.

“Huge expenditures for French Champaign and barrels of live lobsters were common.  Both Richard and Ella chose an open marriage, and their boyfriends and girlfriends also enjoyed time at Little Trout Lake”.

1911 Richard Southgate became ill and called for Loveless to help him in Florida; sadly, Richard Southgate dies in 1912 and Ella marries one of her boyfriends (Jacob Edison Himes) who later squanders the Southgate fortune in oil shale speculation.

The Kendall Kempinski Family bought their summer property in 1927 from Robert Loveless. The land sale was based on an 1861 survey.  He paid Mr. Loveless $25 dollars down and made two more payments of $200 and $275 for a total of $500 for .8 acres of land.  At the time it was about a twelve hour drive from Chicago, Illinois.  There was no road to the point that they had purchased so they would park their Model T on the other side of the Trout River at the 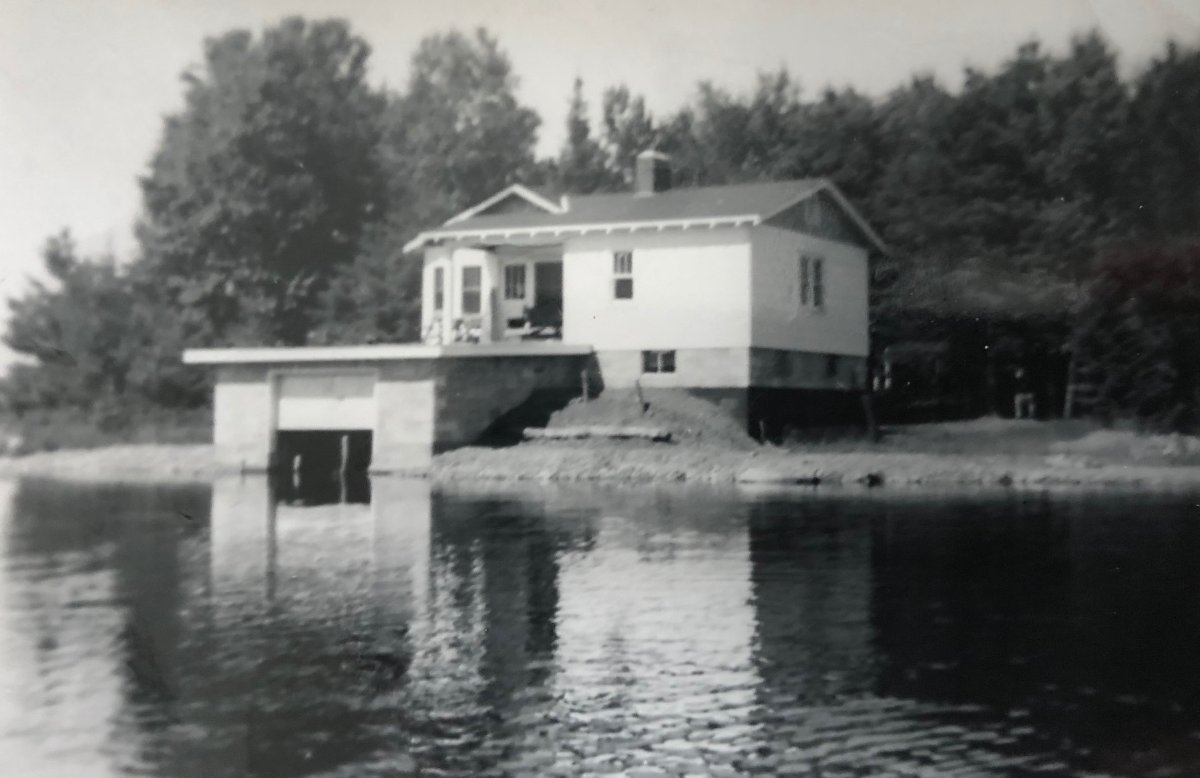 Weber residence.  They then had to make way to their property by boat.  Stanley Kempinski, a Polish American had changed his name to Kendall because he felt discrimination when seeking a good job in the Chicago area. At the time of purchase there was a tiny one room cabin on the property.  The Wisconsin Conservation Commission told Kendall that part of that cabin was on state land so he moved it and created the iconic boat house cabin that still remains on Kendall Point today.  He then built an additional two room cabin. There was no power at the time so the main cabin had a generator and the two room cabin used Kerosene Lamps for light.  Everyone went to bed at dark and arose in the light of day.  Gradually Stanley made two nice places for the family to stay and also began to rent the second cabin.  A few years ago a man in a Kayak stopped and talked to the present owners John and Pam Peters and stated, “The best days of my life were spent in that cottage. One day, Mr. Kendall came yelling down the road that his taxes were raised to $37.50 and now he would have to raise our rent.” Stanley Kendall became friends with local men like Emil Wanatka, Henry Voss, and some of the LaPorte brothers.  He worked hard on the property to improve it but always managed to fish for

recreation.  When Alder Lake Road came as far as Alderwood, Stanley and his brother built Alder Park Road by cutting brush and small trees.  It was very curvy because they avoided the need to cut any 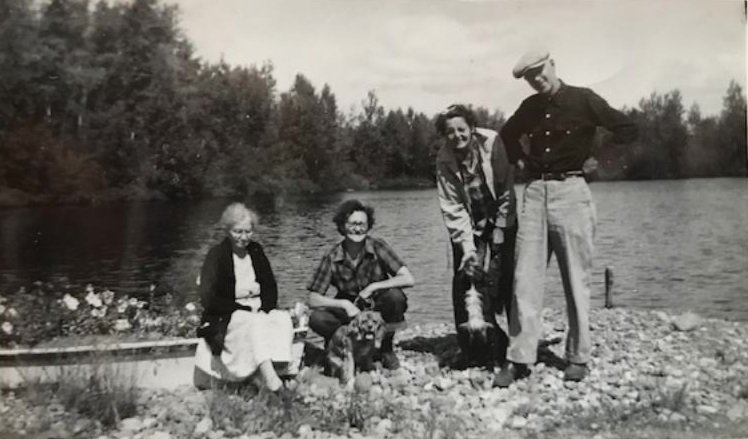 Kempinski family on the outlet of Alder Lake

large trees.  It was an awesome improvement to be able to drive into the point.  There still were land disputes with the Wisconsin Conservation Commission who finally agreed to sell them 150 feet of frontage for $10 a foot in 1959.  It was discovered that much of the .8 acres that Loveless had sold them turned out to be in the river.  When they moved to cottage to create the boathouse, they built out the land into the river and created a sea wall. The negotiations with Wisconsin Conservation Commission extended from 1953-1959.  Along with F.A. Christensen, Kendall bought a second property on the lake and split it leaving Kendall 11 acres.

His grandson, Jerome Kempinski and great grandson, Jason Kempinski were interviewed and related how important this place was to the family.  Jerome stated that his mother felt that coming up north was a hardship because of the difficulty of getting to the cabin and cooking without power.  Jerome loved the swimming, fishing, and exploring he did every minute of his time there.  “As a kid it was paradise.”  Through the years Jerome and his sons became great fishermen and caught lots of fish.  Jerome said that I could smell it in the air when it was time to fish for muskies.  “One of the places we caught muskies was right in the weed bed in front of the campsites on Alder Lake.”  The biggest muskie Jerome ever had on line was lost as it leaped in the air right in from of his father and his grandfather yelled.”  “That is the one you should have caught.”

When the Kendall’s found that electricity was about to brought in, they were told the power line could not go over the river because there was a proposal for a seaplane landing on Alder Lake.  After that fell through they soon were able to get power. 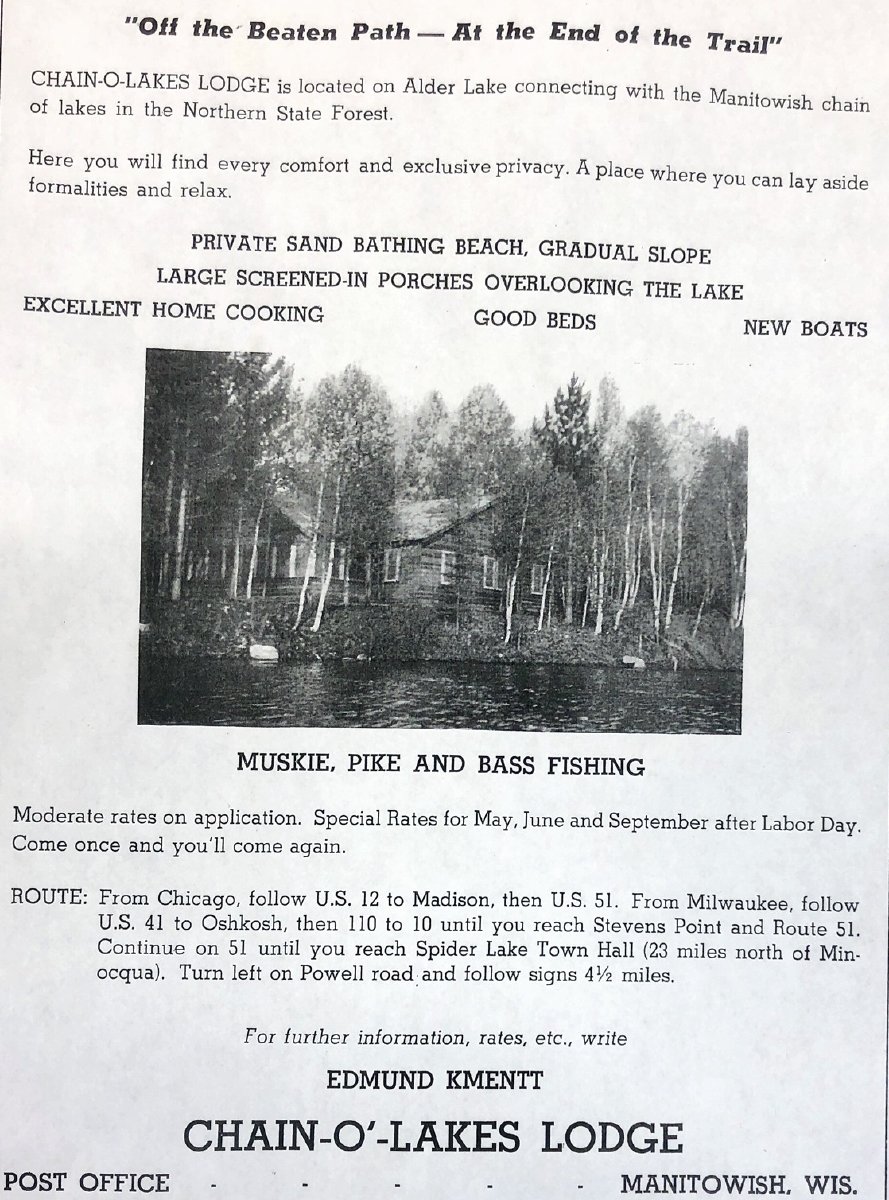 The next property nearest the Kempinski property is a small resort which is known today as Alderwood.  According to Bob Kassein, his mother Ella told that there was a small camp of Ojibwe that lived across the Lake from the mill area on the point between two bays. The Ojibwe gathered blueberries and sold them from this camp. The oral history says that is was once a camp and then became known as Chain-‘O-Lakes Lodge owned by Edmund Kmentt. It advertised a private sand bathing, American plan with excellent home cooking, good beds, and new boats.

The concept of summer camp for children began as the 19th century became more urbanized and industrialized.  In the middle to late 19th century, camps became popular with wealthy urban families that wanted their sons to experience nature and gain an appreciation of camping and living in a natural outdoor setting. The first boys’ camp west of the Allegheny Mountains was Camp Highland located in Sayner, Wisconsin in 1904. Camps were popular for boys because they were thought to build character, self- sufficiency, endurance, and a healthy lifestyle.

As time passed, the privilege of the camp experience opened to boys of middle and lower classes.  By the early 1930s, girls’ camps began to be spring up.  One of those camps was built on Alder Lake, and was owned and operated by Mr. and Mrs. Ralph W. Varney of Evanston, Illinois.  There is evidence that Camp Ontonagon operated from 1932-1939.

The Varneys were parents of three young daughters and a son.  It is likely that the idea of a girls’ camp centered around this young family and the adventure of holding camp on a lake with miles of canoeing right off their land.  Ralph’s wife Jessie was the director of the camp, and the girls were mentioned in newspaper accounts as attendees of camp. 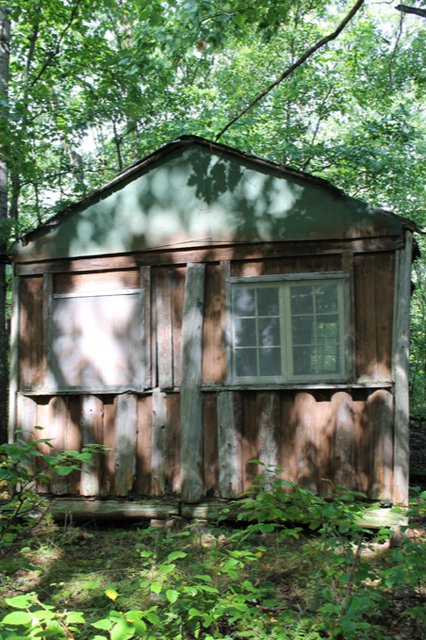 They held a six-week summer camp for 35 girls. Camp typically ran from the middle of June to the end of August. The girls who attended camp came for Wisconsin, Illinois and Iowa and “other places east.”  The girls arrived each summer via train or “motor car.”  The seasonal rate for camp was $150. The camp session typically ended with an Indian Princess Pageant on the last night. The camp had vertical log cabins, a tennis court and an infirmary, which remains on the site, a lonely remnant to days gone by.

Rupert Schmidt purchased the property after the camp was closed. Rupert was a member of the Conrad Schmidt family, which owned a stained glass company in Milwaukee. Much of this information is gleaned from an interview with Helen Erickson, who later owned part of the old camp property.

Ralph Varney, a Harvard graduate, was a Chicago Estate Architect. He designed the David Hall House on Fox Lake in Lake Villa, Illinois, which is on the National Register of Historic Places. He also designed the Meadowood Farm in Lake Forest, Illinois, another designated Historic Place built in 1923.

By 1940, he and his family resided in Washington D.C.  Oldest daughter Louise was a graduate of Smith College and engaged to marry Perry Tewalt.  Son Lane attended Yale University and served in World War II on the Aleutian Islands, repairing radios and listening to Russian communication.  He stated that “he grew up with strong-willed women and that made him strong yet sensitive, adventuresome and eternally optimistic.”  Youngest daughter Portia graduated from Pennsylvania University and worked on advancing women’s opportunities throughout her career as an Occupational Therapist and through volunteer life.  The Varney family seemed to live by and share the ideals of helping develop life skills for women that made them strong and independent.

Mrs. R.W. Varney of Manitowish and her son, Lane, 15, were painfully burned Saturday noon when the main lodge of Camp Ontonagon, a girls camp near Mercer, was destroyed by fire.  Mrs. Varney was burned when she tried to enter the building to get some belongings.  She suffered burns on the face and head.  She was brought to Grand View hospital Saturday evening.  Lane Varney was burned on the face and arms in trying to extinguish the fire.  He was brought to the hospital yesterday.  Information on the cause of the fire and extent of the loss was not available today.

Camp Ontonagon, a private summer camp for girls located on Alder Lake, was broken into recently and five new canoes were stolen.

In 1944 the Chain-O-Lakes Lodge was sold to Mr. & Mrs. Edward Scotten, also from Chicago. The property name was then changed to Alderwood Lodge. 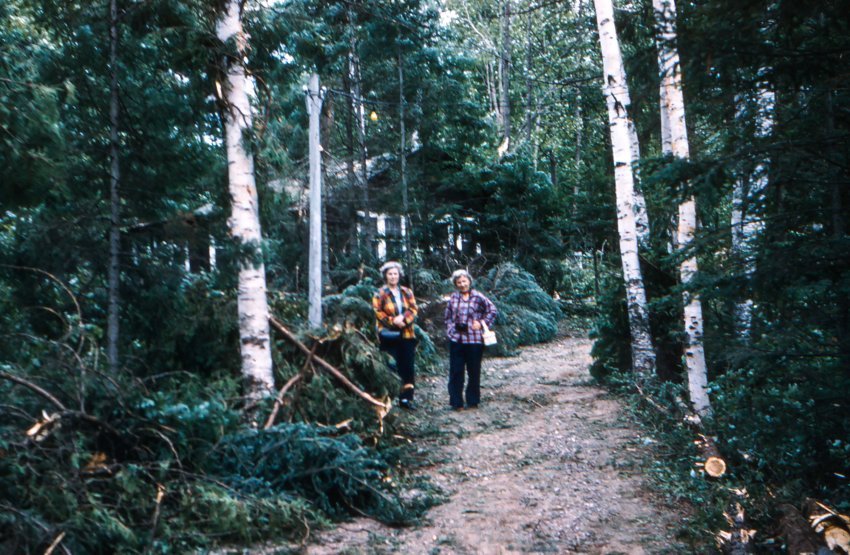 Cora. Scotton and Marie Cabney in front of Alderwood 1958 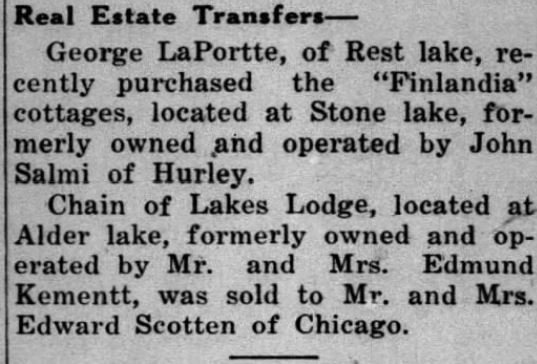