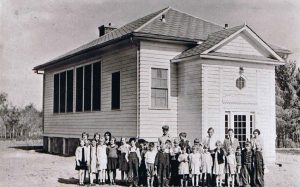 The Earliest Formal Education in the Northwoods

If you were a child of one of the pioneering families of northern Wisconsin, your opportunity for a classroom education probably was available in a one-room school. Communities gathered resources to hire a teacher and buy supplies. Many of these schools were built by volunteer labor with the goal of giving an opportunity to the children of the families who were forging a living in areas with very few opportunities for formal education.

These schools typically had one teacher who taught first through eighth grades. Teachers were hired, and they could be men or women. These men and women many times boarded in the homes of families who had students attending school or who were members of the school board.  Men were usually paid more than women. There were very strict rules for teachers, and sometimes their religion might keep them from being hired.  In 1915, for example, if you were a woman, you were not to marry during your term of contract or keep the company of men.  You weren’t allowed to travel unless you had the consent of your school board, and you even had to make sure you wore two petticoats!  (Marquette Historical Society, page on one-room schools in Wisconsin)

Locally, the Rest Lake and Spider Lake schools’ ledgers only recorded having women teachers. In the beginning, teachers only needed an eighth-grade education. Later, teachers needed a high school diploma plus two years of education from a “normal” school (i.e., formerly a school or college that trained teachers). Many of the University of Wisconsin campuses, like Stevens Point, started out as “normal” schools.

Students in one-room schools learned that they were part of a community and that meant learning to be responsible for not only your school work, but helping younger students as well as the teacher, and keeping the school itself in order. A good work ethic and concern for others were lessons to live by. As a student, you focused on reading, writing, arithmetic, geography, history, penmanship and English. According to a firsthand account, “We had music at the beginning of the day in winter so that we could march and clap hands to warm up cold feet and hands.” (Leola Hermanson, Madison.com)

Students were also responsible to help the teacher maintain the school and keep it warm and clean.  Many students were assigned jobs such as washing the blackboards, keeping the floor swept, hauling in water for drinking, and filling the woodbin. Students traveled to school by walking through the woods and maybe across lakes in the winter, on skis, or if lucky, by horseback. Some communities might have different family members transport the children by wagon and later by car. The students brought their own lunches that they carried in small lard, coffee, or even old paint cans and syrup pails.

School ledgers kept by the Voss family were lent to the Historical Society to gather facts about early school experiences in the Manitowish Waters area. The ledgers were from the Spider Lake School and the Rest Lake School. These ledgers mostly recorded student grades and attendance information, but added some insights on special occasions and needs for the respective schools. Students studied arithmetic, reading, language, grammar, drawing, agriculture, physical training and geography.

Spider Lake School was located on the road into what is today The Chippewa Retreat, while Rest Lake School was on County Road W. These ledgers offer a glance back in time at some school activities that brought the community together in the early days of European American settlement.

At the opening of the school in 1915, there were four students:  Henry, Helen, Francis and Willis McElrone. The students put on a Christmas program and had a school picnic in June.  Their teacher was Phyllis Andrews.  By 1917, the school had a fifth student, Robert McElrone.

By the fall term of 1925, the Voss, Doriot, Konrad, LaFave, Loveless, Forsberg, Hunger, Johnson, Norstrom and Amend children attended the Spider Lake School.  Their teacher was Dessie A.  La Mere, with the students in the first through seventh grades.  Her first gathering of students and families was a “Marshmallow Roast” held at school in September to “simply bring the community together.”  The school programs had expanded to Christmas, Valentine’s Day, an “All Food Party,” an exhibition of work, and the end of year picnic.  Attendance at these school programs was from nine to 20 people. Many times the special programs were also a time to raise money from parents for school supplies.

By 1927, Spider Lake School had employed three other teachers: Elna Johnson, L. Esther Pelkanen, and P. A. Christensen. In 1928, Billy Peterson became a student, and there were then 38 children attending the school. A school luncheon was a new addition to invite the public to spend time at school.

Needs addressed in the 1928 end of year report indicated that the girl’s toilet building had leaks and needed a new roof.  The boy’s toilet needed a new window and to be painted inside.  Another request was that the back end of the woodshed needed to be boarded up and a good strong padlock placed on the woodshed door. Someone must have been helping himself or herself to the school wood supply! New students enrolled in the 1928-29 school years were from the Koerner, Bloomquist, Otto, Pepowski, Larsen, Gerlack and Schuster families.

In October of 1936, there was a “Hard Times” party/benefit to help raise money for needed supplies for the school, and a total of $4.50 was collected.  Twenty-one people attended the event.

In 1924, the Ilg, Brown, Peterson, Devine, Geschwell, Norstrom, Borniak children were enrolled.  The teacher was Mrs. Theriault. That year, a ski tournament was held, and Joe Ilg, Agnes Borniak, and Billy Peterson won prizes. Debate, dialogue and recitations were important parts of programs given by the students throughout the year.  By 1926, Ida Peterson was the teacher, and at her Halloween party, each child brought a batch of homemade fudge.    She liked having them perform one-act plays, sing songs, and do recitations.  The Badger Society gave the children parties at school.  At the annual Christmas party, presents were hidden for the children to find.

The teachers wrote requests for supplies for the calendar year in their ledger books.  The list included: examination paper, penmanship paper, a new dustpan and a new broom.   Other needs were for books in the library to be catalogued.

Moving Away From the One-Room School

According to Dale Williams, site director of the Reed School in Neillsville, Wisconsin, the one-room schools of Wisconsin reached their peak by 1930 and were mostly gone from the landscape by 1960 due to consolidation.  At one time, Wisconsin had 6,200 one-room schools.

This article is just the beginning of the history of schools in Manitowish Waters. Eventually, Manitowish Waters would grow and begin a two-room school that educated our children for many years. That rich history will be researched and shared in the future. If anyone has information on or photographs of local schools, please contact the Koller Library.  We would like to create a history of all the schools in our community.