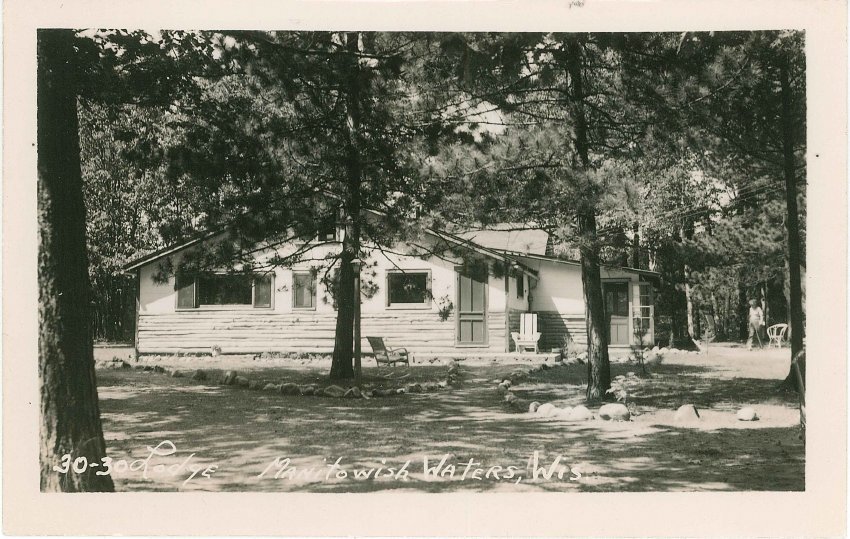 The first mention of Mr. and William Mehl coming to the Manitowish Waters area is in a 1934 article telling of their two-month vacation at their cottage on the Manitowish River. In this article, it is reported that the couple is spending their winter at their home in Allentown, Pennsylvania. By 1947, their summer home is said to be on Vance Lake and their winter home is in New York.

By 1949, an ad instructs deer hunters to make their reservations at the 30-30 Lodge where they can stay the entire deer season for $40. Thus was the beginning of the Mehl’s 30-30 Lodge. Early oral histories and some town residents claim the bar of the 30-30 Lodge was built around an old trapper’s cabin.

The 30-30 Lodge became a popular spot for hunters and fishermen, and Bill was known as a great fishing guide. Valerie Mehl was known as a wonderful cook, and tourists chose the lodge as a great place for dining. Local families enjoyed the lodge as well and celebrated family events here. For example, in 1956, family and friends of Mary Brunner celebrated her 75th birthday at the lodge. 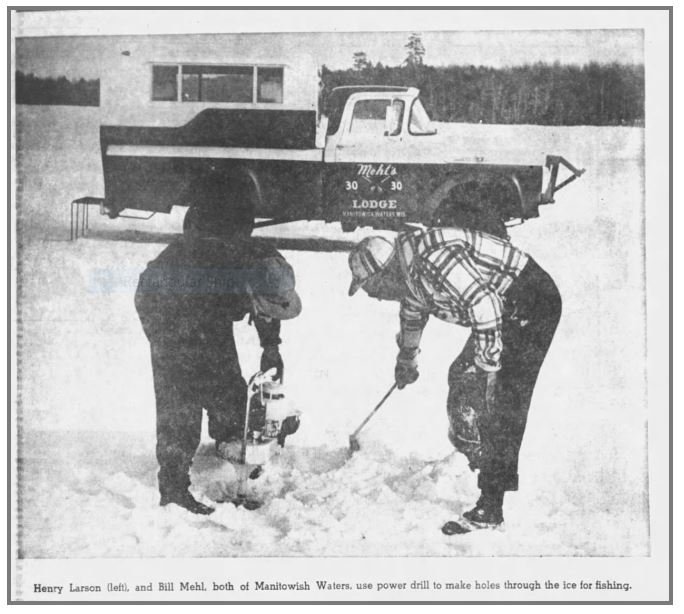 During the 1950s, Mr. and Mrs. Mehl not only ran a resort and served great food and beverages, but they also both ran for public office in Manitowish Waters. Bill ran as a candidate for town supervisor against Henry Larson and Neal LaPorte. At the same time, he also successfully ran for Justice of the Peace, a position he held for many years. Valerie ran for and won the seat of Town Clerk.

In the 1950s in the Iron County Miner, a Northwoods fishing fan wrote a poem dedicated to Bill and other guides of Manitowish Waters.

I long to go fishin’

Up north on the lakes ‘mong

Where muskies and pike,

Make sport at the end of your line.

I long to go castin’

No more am I askin’,

‘Cept sure on my stringer are fish,

The sport it provides,

Of the Waters of Manitowish

By CSS Judge:  When I get lonesome, I try to cheer myself up by putting in rhyme my good thoughts about all you good lads who contribute so much to the popularity of our water.”

As Justice of the Peace, Bill became very involved with cases involving game violations, and he worked hard to convict violators, confiscate their licenses, and take away their weapons. He was also active on the board of the Manitowish Waters Sportsman Club, and in the early 1950s, the club worked hard to protect the deer population.

As a popular fishing guide, he often told his customers that the fish responded to the barometer as well as the wind, and he was often proven right in these predictions. He was featured in a newspaper article about ice fishing in the Wausau Daily Herald. During the 1951 Muskie Marathon, he was named the most successful Manitowish Waters guide in the contest. He believed in teaching children to fish, but to “hook” them to the sport, it was necessary to have them fish with a cane pole for pan fish which took the line quickly and kept the kids entertained.

In the spring of 1961, the 30-30 Lodge was open for Easter dinner and served prime rib or roast turkey from 1 to 8 pm. Eight days later, Valerie Mehl died suddenly, and Bill was left to run the 30-30 Lodge as a widower.

By 1974, Bill had spent 66 summers fishing the waters of the Manitowish region. He told his fishing customers of the 1970s that summer now brought more than fishermen. They were the minority on these lakes as the fast boats and water skiers were taking control of the waters. The avid fisherman of long ago was being replaced by the family man who fished a little and bought fast boats for family fun. Bill went on to retire in Ft. Lauderdale, Florida and passed away in 1994. 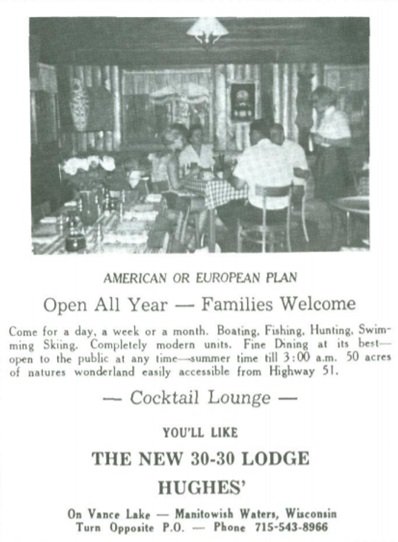 The next owners of the 30-30 Lodge were Dennis and Beulah Hughes. One ad promoted the lodge as the fun land of the north with fishing, hunting, water sports, and horseback riding. At this point, the Hughes seemed to be running a family resort. However, by 1972, the focus of newspaper ads showcased Go-Go and topless dancers. Stories abounded about the Hughes’ 30-30 Lodge, and it was no longer a family dinner location. Eventually, the business faded away, and the lodge was torn down. 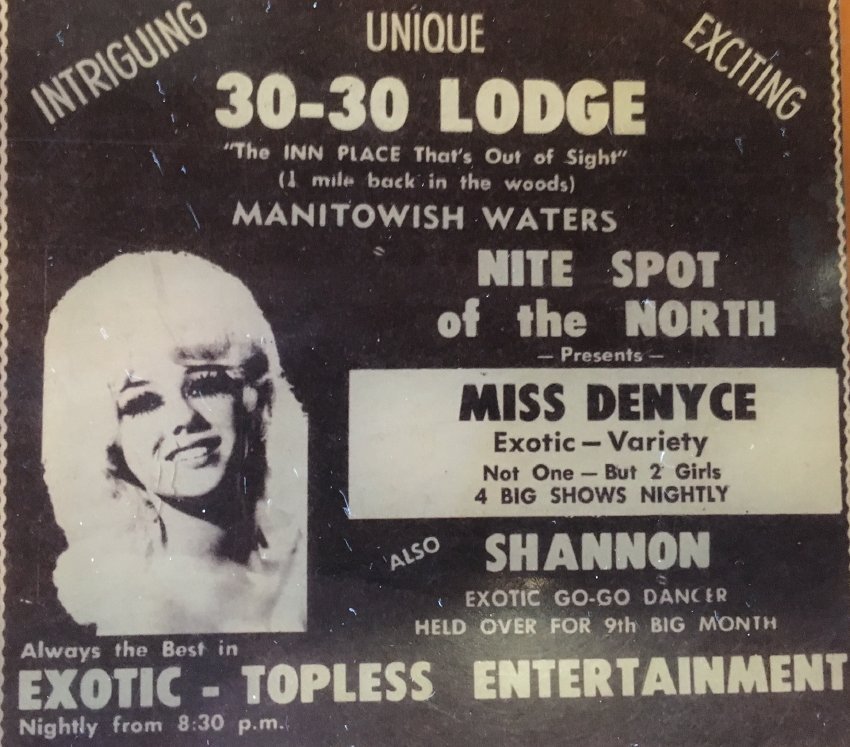 In July of 2005, there was action again on the 30-30 Lodge property as Denys Ray Hughes, son of the owners, returned to Manitowish Waters followed by federal law enforcement which was aware of the potential threat of this man because of a car search in Kansas. The FBI and ATF sent agents to Manitowish Waters to search the Hughes family home. Homes in the immediate area were evacuated while agents determined the threat Hughes and the items he possessed were to the vicinity. He was arrested in Manitowish Waters on the threat of possessing explosives, illegal silencers, and bomb-making materials. His Arizona apartment also turned up similar items. He was not believed to be tied to terrorist organizations but claimed he was a militia man and survivalist. He was sentenced to seven years and three months in prison for trying to create a biological weapon and other bombs. In May 2011, he was being transported from a Colorado prison to a halfway house in Milwaukee by bus when he disappeared in Nebraska. His body was found in 2012 along the South Platte River in Nebraska.  John Hanson, town chairman at the time of the raid by federal authorities in Manitowish Waters, was quoted as saying, “We haven’t had this much police presence since Dillinger was here.”

Thus, an exciting, frightening, and sad end to the legacy of a Northwoods establishment, the 30-30 Lodge.

Other Resorts at this locations since being founded in 1928