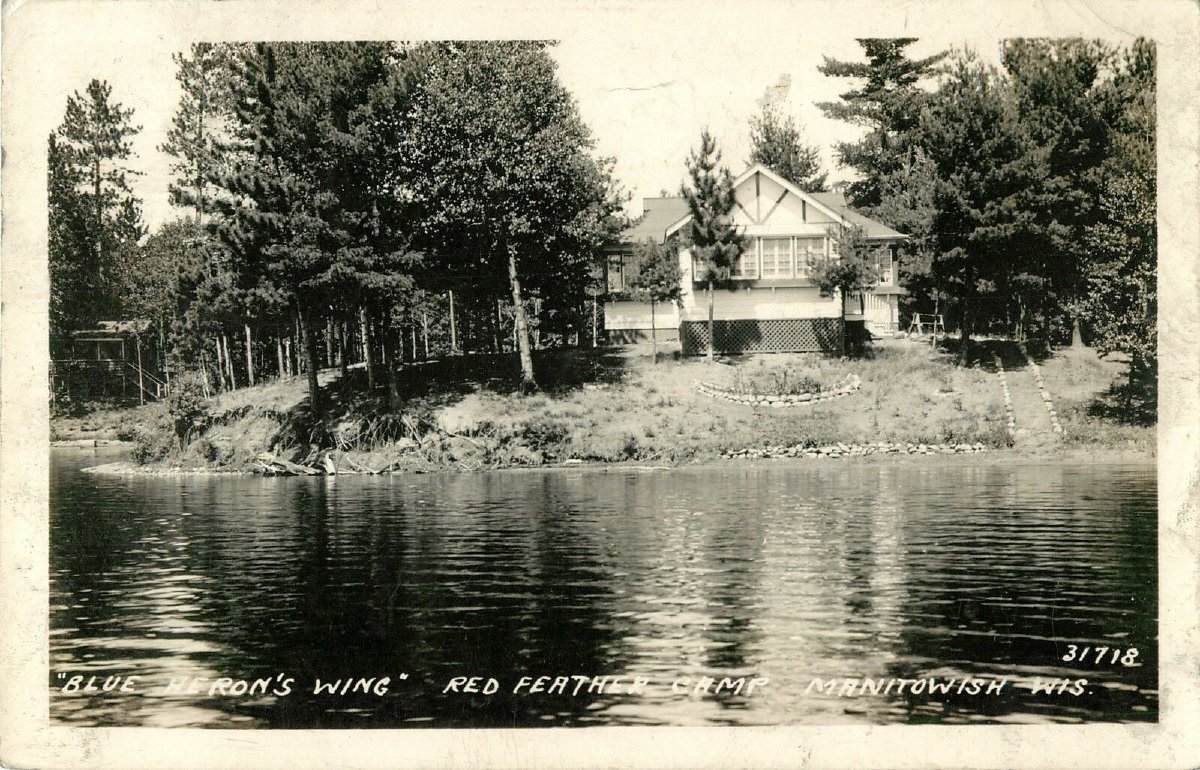 Some may think of the northern Wisconsin resort as a thing of the past, replaced by modernized hotels and Airbnb’s. But some resorts, like the Red Feather Lodge, have lasted through the decades and even inched into the 21st century.

The Red Feather Lodge, despite changing ownership several times, has been a mainstay on the shores of Rest Lake for almost 100 years. As early as 1923, the Red Feather Lodge is mentioned as a place for guided fishing and rest. An article in The Chicago Tribune dated August 8th, 1923 details a trip the reporter took up to the “Manitowish country” to fish with a guide named De Coteau and their stay at the Red Feather camp. This history traces its way all the way up to today where the Red Feather Lodge has advertisements in the Manitowish Waters Chamber Booklets and its own website.

Maps of the town of Manitowish Waters and its many lakes from the 1950s and 1960s show that Red Feather Lodge remained in the same location it is today. The resort grounds are behind Fox Island, south of Camp Jorn, on Cherne Road, which is fittingly connected to Red Feather Road.

While the location of the resort never changed, ownership did. The first artifacts on the Red Feather Lodge come from the 1920s, and most show ownership to a “Chas. B. Nichols.” Not much information can be found about this first owner, but the lodge saw a lot of activity in the ‘20s and ‘30s. Advertisements during these decades can be seen in Chicago, St. Louis, Ironwood and Madison newspapers, calling travellers to “Charming roomy cottages… electric light. Excellent cooking, fishing, boating (with motor).” 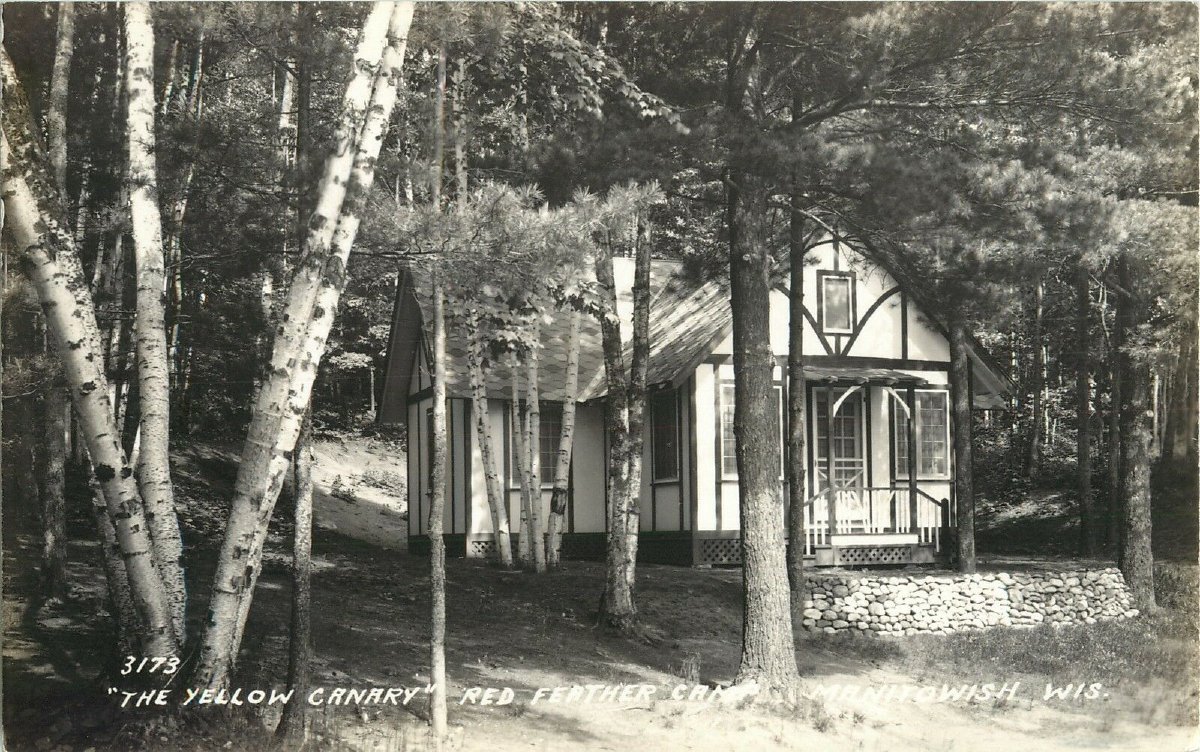 Like many resorts during this time period, fishing seems to be the main draw. Multiple stories have been written from reporters who took guided fishing tours from Red Feather Lodge. For example, in 1928 a story was written about the resort in the Post-Crescent from Appleton. The article was titled “Good Sportsmen Consider Comfort While Camping,” and it details the reporter’s time on the Manitowish chain and the resort. “The Manitowish river has long been known as a famous stream for muskies, wall-eyed pike and bass. Between Rest lake dam and the mouth of the Turtle river the Manitowish offers some eighty miles of wonderful fishing.” The article continues on about the resort’s many cabins like “Pink Rabbit’s Foot, the Blue Heron’s Wing, the Tadpole’s Tail, the Eagle’s Nest…” and so on. Another advertisement from the Decatur Daily Review angles toward fishermen to visit as well, “there is every variety of game fish known to fresh water…”

Even with all this talk about fishing, the articles and advertisements do make space to boast about the resort’s sandy beaches, home-cooked food, and proximity to golf courses. From research, it seems that Nichols’ ownership ended around 1944. A clipping from The Chicago Tribune in April of that year puts the lodge up for sale, stating, “Will sacrifice on account of ill health and age. Easy terms. Red Feather Lodge in Manitowish Waters, Wis.”

The next owner to purchase Red Feather Lodge was John F. Ziemba, whose name is linked to the resort from 1944 to 1958. During this time, Ziemba apparently expanded the lodge as multiple help wanted ads were found for caretakers, “handy men”, cooks, waitresses, and cabin girls.”

Along with the increased workforce, Ziemba also expanded the resort to appeal to those vacationers who were not necessarily looking to fish. Advertisements through the late 1940s and 1950s moved away from fishing and more toward fun for the whole family. The resort promoted sandy beaches, swimming, canoeing, horseback riding, and golf, along with modern cottages with baths, showers, running water, and heat.  This seems to mirror the American societal movement of family vacations and road trips that began after World War II and the advent of the baby boom generation. The shift from serious fishing excursions to family fun can best be seen in the 1949 Manitowish Waters Chamber Booklet, “You’ll enjoy our ‘cock’s tail’ lounge with its quaint surroundings.” 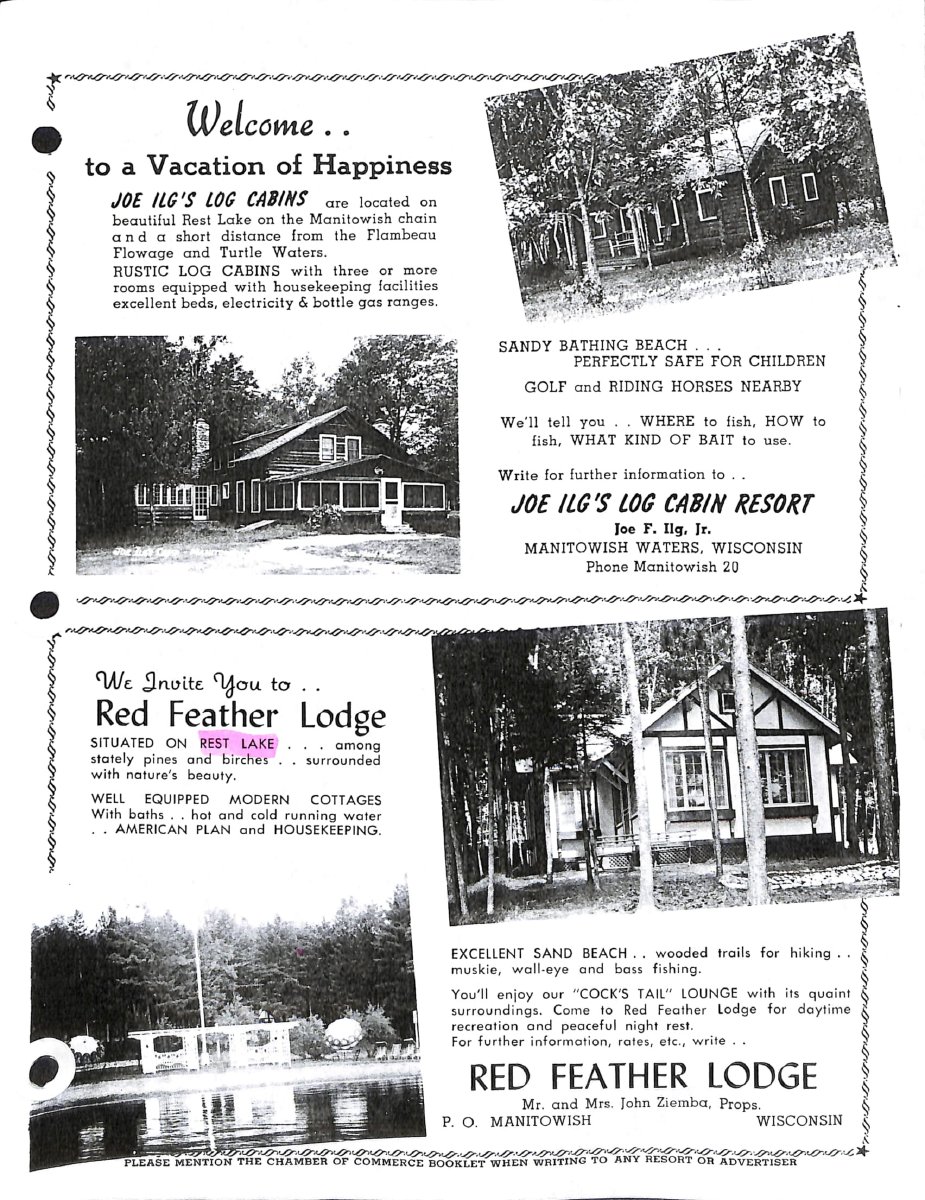 Advertisement from the Manitowish Waters Chamber of Commerce book

Ownership then fell to Edward and Norma Schultz, between the years of 1958 to 1994. In Norma’s obituary, in the Green Bay Press-Gazette, it says that she and Edward moved to Manitowish Waters in 1958 “where together they owned and operated Red Feather Lodge… until her retirement in 1994.” The Schultz’s left their mark on the resort, literally and figuratively. Advertisements around the time they took ownership show they changed the name of the resort to “Schultz’ Red Feather Lodge.” They also emphasized the resort’s beauty as a draw for vacationers. “To really appreciate the wonderful work of Mother Nature one has to see the great job that she has finished at the Red Feather Lodge” claims an ad from the Ironwood Daily Globe. Another from The Chicago Tribune reads, “Our beautiful beach was not just a hurry-up job, it required many moons to form a large body of water bottom without any sudden drop-offs.”

These last advertisements, drawing attention to the resort’s natural allure and grace, may give us the answer to why this resort has stood the test of time while others have faded away. Ask those who have boated by or been on the resort grounds itself and they will tell you of its picturesque landscape and gradual, pleasant beach. It makes sense that this resort is still a destination for travelers even to this day.

Other Resorts at this locations since being founded in 1923