Welcome to Discovering the Northwoods from the Manitowish Waters Historical Society. We will take you on a journey through our local history with the help of primary source documentation. To learn more about this rich history or about the historical society – check out our website at  mwhistory.org for blog posts, show notes, our YouTube Channel, and a full transcription of this episode!

As with many historical works from this era, there are phrases, terms, and descriptions that are inappropriate to our modern sensibilities. The Manitowish Waters Historical Society in no way condones these offensive remarks or passages but chooses to read this publication in its entirety for educational purposes and accurate historic context.

We would like to introduce A Real Hot Lynx Story written by E. Hough. The original source is from the 1898 Forest & Stream Magazine publication. Our reader, Bill Zuicker, will bring to life the story of Fay L. Buck’s encounter with Canadian Lynx.

A Real Hot Lynx Story. In the columns of the daily press you get a great many stories of terrific encounters between men and wild beasts. I have had occasion to say that I have heard of three cases where a mountain lion is attacked a man. In one of these cases the beast thought the man was a deer. In the Sunday papers I have read of many cases where “panthers” have had awful fights with men, the man always coming out victorious, and with their dialect uninjured. In the Sunday papers you read of bear fights happening in Maine and Pennsylvania, or elsewhere within the natural range of the New York Sunday papers, in country where there was never any bear but a black bear, which latter animal never did have as much fight to him as a healthy hog. You read also of horrible fights with immense lynxes, which usually weigh at least “80lbs.” In the lynx fight there’s always a great deal of blood shed, and the hero goes to Congress, or something of that sort. 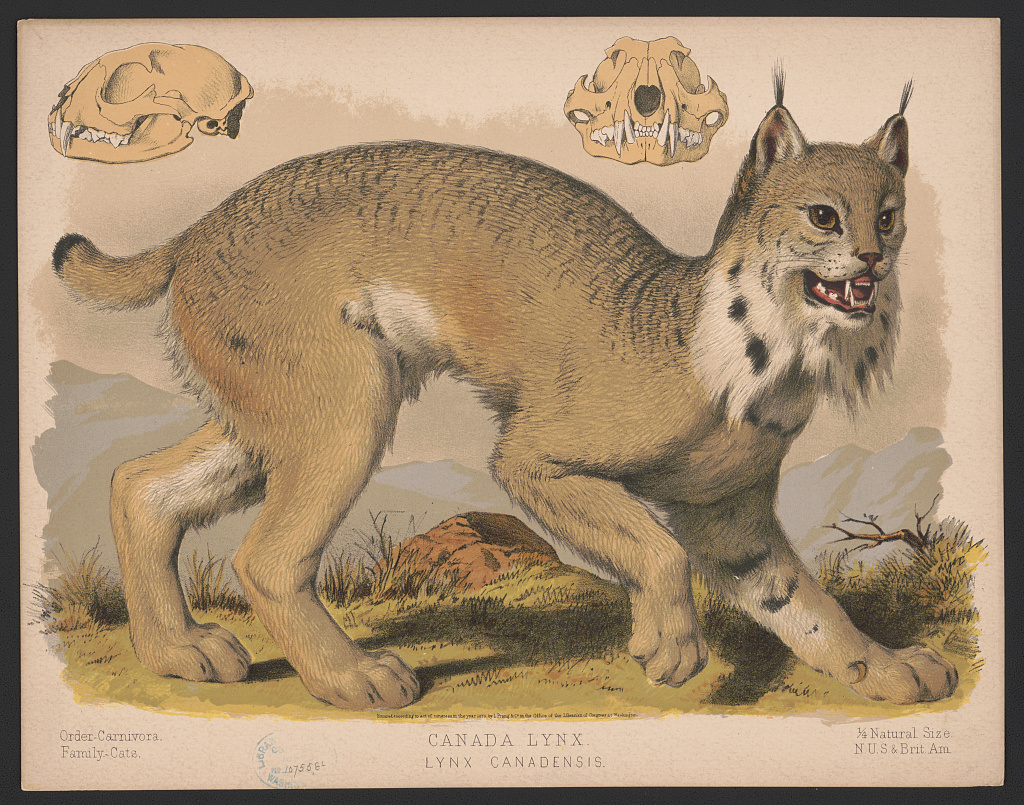 I wonder how it would seem to readers of the fakes of the daily press on such matters to read an actual lynx story, just as it really happened, without any coloring? I have such a story before me now, from the hand of Fay L. Buck, a young man who lives at Manitowish, Wisconsin where I met him and went out trapping with him one winter. Fay Buck is a powerful young fellow, a fine woodsman and guide, and the best about him is that he tells the truth. He is about as much afraid of a lynx as he is of a woodchuck, and it appears that when he wants any young cats of that kind he doesn’t mind the mother of the litter very much. This is his story:

I had a little experience with some lynxes the other day which may be interesting to some of the readers of Forest & Stream. I went out to pick some raspberries for my guests, when about half-past ten in the morning I heard a peculiar noise a short distance away, and being rather inquisitive, I went over to see what was going on. To my surprise I found an old lynx and two young ones. As soon as they saw me the two young lynxes started to climb trees, each one a different tree, the old one ran off.

Now, how was I to capture the young ones alive? I had a string or piece of heavy fish line about 2ft long, and I made a slip knot in one end and tied a stick about 3ft long on the other end, in the middle. I took off my shoes and proceeded to climb the tree. The first lynx was up a little dead maple tree, close to a birch stub. The limbs on the tree were dead and would break off when I touched them, which made climbing very difficult, but, of course the little fellow went to the top, and so did I. He appeared to be very much annoyed, but by a long struggle I got the slip noose of my string on his hind foot. He then jumped over on the birch stub, and I let go of the stick which was at the other end of the string, and the weight of the stick on his hind foot slowly took him to the ground. I managed to be at the bottom of the tree as soon as he was, and to my surprise the old lynx was hid and I did not see her until she sprang. She struck me in the back just before I let go of the tree, and she tore my shirt half off. I whirled and struck her with my fist, and picked up a club, and she jumped one side. I then picked up the young one that was fastened to the string and carried him off about ten rods, where I left him. This drew the attention of the old lynx while I went back after the other young one, which was at the top of a large burn hemlock.

This was not a very encouraging job, as my shirt was about half gone, but anyway I proceeded as before, I got to the top, and the limb the little fellow was on broke and he fell to the ground and hid under some brush. I got down carefully, threw a stick across him and stepped on the stick until I slipnoosed his hind foot. Then I had the two young fellows safe.

There was an old burnt lumber camp close by, where I found an old tin boiler with a cover to it. I put the two lynxes in it and carry them home. My berry picking was quite successful, I thought. The old lynx followed me for about a mile. I have the two young ones, which are about two months old in a cage about 8ft. square, and they’re doing well. I was a pretty sight when I got home.

This is a real lynx story written by a man who has not gone to Congress, and who is not the oldest inhabitant. It’s a pretty good story, and it is true.