Ernwill Michaelis was born on February 20, 1898, in Manistee, Michigan. His given name was in honor of his two grandfathers, Ernie and William. As a young man, he moved to Chicago where he made a living as a draftsman. He met his 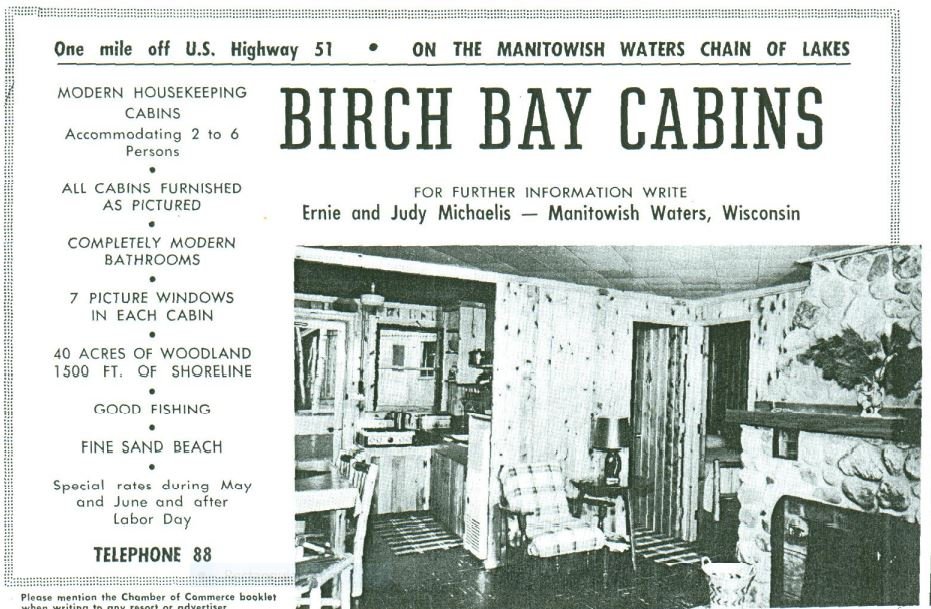 future wife, Judy, at the firm where they were both employed. Judy was born and raised in the Chicago area, and she and Ernie were married in 1921. They had two sons, ‘Bud’ (1925) and John (1930). Ernie later went into the automobile repair and painting service. Automobile work affected Ernie’s health, and his doctor told him that he needed to stop working around exhaust and paint products. It was also after WWII, there was plenty of cash, and people were buying new cars, not getting old cars refurbished. At 50 years of age, Ernie decided to sell his automobile business and begin the next chapter of the Michaelis’ family life, which was to own and operate a family resort.

Ernie and Judy learned about Manitowish Waters through friends who fished and praised northern Wisconsin for its nature and beauty. Ernie’s barber, Ted Hedger, was the one who told them that they should come to Manitowish Waters. They stayed at George Baszo’s Hillcrest Resort. Ernie talked to Baszo about whether he

knew of any land for sale. George knew of a piece of land close to his resort that belonged to Matt Plunkett, who was a land surveyor. At first, they looked at resorts that were for sale and found that most of them needed so much repair work and “modernizing” that they decided to buy vacant land and build their own homestead and cabins.

Ernie and Judy bought 48 acres of land on the Manitowish Waters chain of lakes in 1948.  This land was situated between two bays on the Manitowish River between Rest Lake and Stone Lake. The land was undeveloped and had no road access from the town road to the river and subsequent resort site. The name given to their new venture was Birch Bay Cabins, due to the abundant number of white birch trees located on the property. The undeveloped land was part of the mixed deciduous and coniferous forest that bordered the river. According to  John, the person who sold the family their land was Matt Plunkett, a Mercer land surveyor. Plunkett liked Ernie and the fact that he had two sons. Plunkett had already blazed the start of a decent trail to the lake. This trail eventually turned into the winding road that leads into Birch Bay today. John told of chopping trees with axes and saws along with an Oliver Crawler bulldozer Ernie purchased to assist removing stumps on the trail.

They hired a local contractor to begin building the cabins during the winter. Unfortunately, the contractor became ill and had to stop construction. Ernie designed the cabins and their home. As soon as John was done with his senior year in high school, Ernie, Bud, John, and the contractor’s helper went to work to build the six cabins, an office, and a three-car garage with an attached shop area. They cleared all the land and did all the construction except for building the fireplaces, which was outsourced to another local craftsman. Most of the stones for the fireplaces came from the excavation of the house and cabin sites. John remembers assisting the stonemason in finding ‘square’ stones for the fireplace sides that extended into the cabin’s main living area. 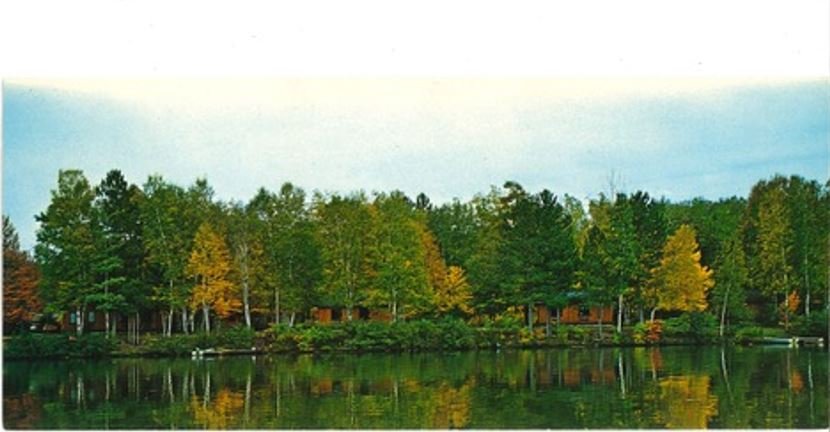 The resort opened on schedule for the summer season of 1950. Each cabin was equipped with a wooden boat. The wooden boats were eventually replaced by Alumacraft boats, saving hours of maintenance with manual upkeep. There were no phones or televisions in the cabins, allowing the guests to enjoy the Northwoods and rejuvenate from city life. Families began to come to Birch Bay! Many of these families were repeat customers and became good friends of the Michaelis family through the years.

The original vision was to spend the summer season in Manitowish Waters and return to their home in Chicago in the winter.  It was soon apparent that this plan was too expensive, and the family made Manitowish Waters their permanent home in 1950. They sold their Chicago home, and John spent his last year in high school living with his aunt and uncle in the Chicago area.

The Jack and Mary Stuprich family was looking for a new place to spend their summer vacation during the summer of 1951. Mary was not a very good traveler and wanted to find a fishing place closer to their home. They had been spending vacations on Lake Vermillion in Minnesota. Their son, Don, was an avid fisherman, and one of his buddies told him about Manitowish Waters. He ordered a Manitowish Waters Chamber of Commerce pamphlet, and he had three choices to show his family. His parents told him to choose, and he picked Birch Bay Cabins. Their daughter, Mary Ann, became quite intrigued when she saw the letter confirming the reservation. The return address was entitled “ER Michaelis and Sons.”

The family arrived and stayed in Cabin 3, and that is when Mary Ann first met John Michaelis.  She was 16, and she thought he was so nice and handsome, but he was 21! John thought she was really beautiful but still very young. Don and Mary Ann had become friends with Bud and John. Don wrote letters to John while he was in Korea. Mary Ann decided she would write him and send him cookies. That sealed the deal in John’s eyes!

Bud was five years older than John, and from the beginning of the resort, he helped his parents run the resort. He never married. John helped with the resort as well. He went into the service in October of 1951. He was sent to Korea where he was wounded and received the Purple Heart. One of his fondest memories of Korea was receiving a Christmas tree in the mail from his father. He told of receiving it in a cylinder with two pieces of lath and a nail for making the stand. It was a small treetop. The men in his unit decorated it with foil ornaments they made from the lining of their cigarette packs. This story was printed in The Chicago Tribune.

When John came home, Mary Ann was 18 and had graduated from high school. Over the next several years, they dated, became engaged and married in 1955. They spent their first winter in Arizona where John’s parents spent their winters. They moved to Manitowish Waters in 1956 and made their life at the resort. John and Mary Ann had four children, Pat, Mike, Bob, and Tom. The first three children attended the Manitowish Waters’ three-room schoolhouse. In 1962, they built their home on the property and became involved in the community. John was a volunteer fireman, and Mary Ann as a member of the Lady Queen of Peace Altar Society. Mary Ann had always been a creative person and was known for her excellent embroidery, knitting, and other handwork. In 1972, she won honors at the Manito Art League show for her stitchery. She taught classes in macrame and other crafts. To supplement their income, Ernie, John, and Bud did lots of side jobs, and they were so handy they could do just about any project.

In the late 1960s, Postmaster Ted Daniels asked John Michaelis to fill in at the post office, and soon John was working during busy seasons like summer and Christmas along with Ellen Perkins. In 1971, John was named postmaster of Manitowish Waters, following Daniel’s retirement. 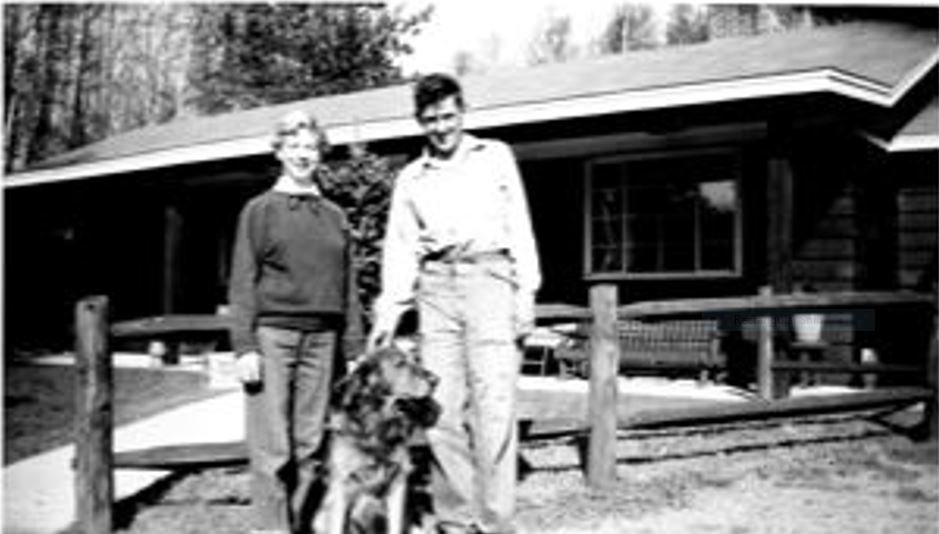 Ernie passed away in 1972 and Bud was running the resort full time, with some assistance from Judy, John, and Mary Ann. In 1974, the family decided to sell cabins 4, 5, and 6 as cleaning six cabins multiple weeks of the summer season was too demanding. Many of the past guests were interested in buying one of these great gems, and three lucky families were thrilled to own a Birch Bay Cabin. Judy passed away in 1991. One year later, Bud decided to retire and move to the state of Washington. Sadly, Bud passed away in 1994, while just beginning to enjoy his world travels and hiatus from running the resort.

In 1993, Mike and Jackie Michaelis became the third generation to oversee the operation of Birch Bay Cabins. While upgrades were made to the internal infrastructure during this time, the cabins maintained their rustic Northwoods look and feel as envisioned and created by Ernie and Judy. In 2003, Birch Bay Cabins stopped operating as a resort after a run of 53 years.  Today the property and original remaining three cabins are being used as a retreat for the extended Michaelis family. Mike and Jackie continue living in the original “homestead” of Ernie and Judy. Birch Bay Cabins now provides lasting memories for current and future Michaelis family members and friends.

Other Resorts at this locations since being founded in