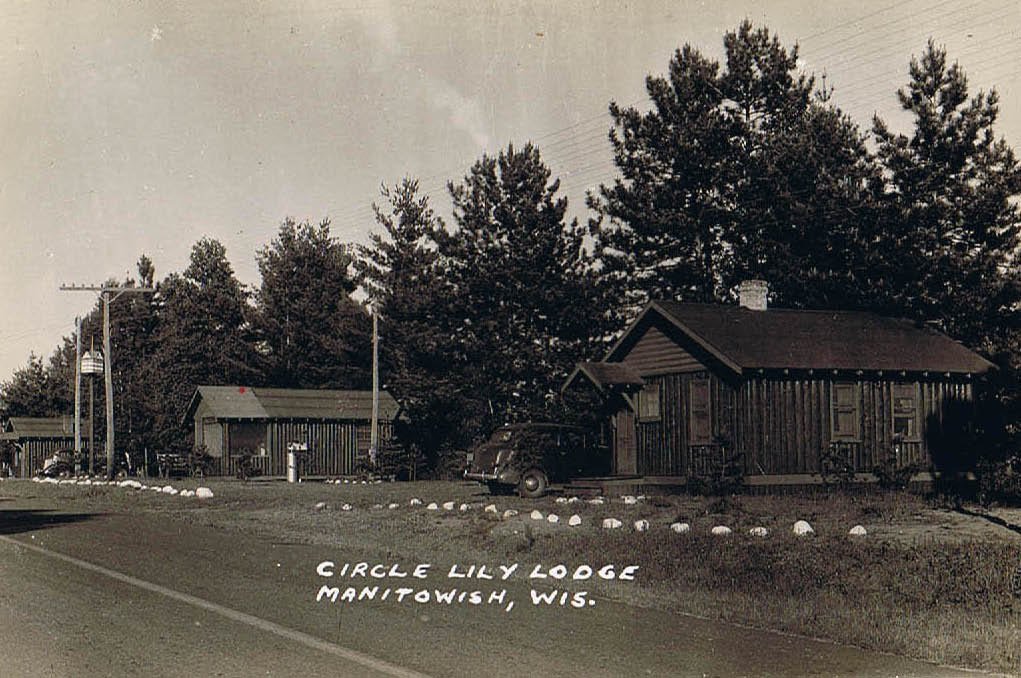 Louis Laffin was born in 1893 in the town of Hewitt, Wisconsin. He served his country in World War I. In 1922, he married Clara Hahn, a teacher in the towns of Texas and Hewitt. He served as a constable in Hewitt in 1924. However, it was his main career as a logger that brought him to the Northwoods. By 1930, he built Circle Lily Lodge (first known as the Wayside Inn), located along the shore of the Manitowish River. The Laffin’s land also bordered Circle Lily Creek and covered 40 acres.

The Great Depression and Prohibition brought hard times to the area, and Louis Laffin was charged in 1932 with violating the national prohibition laws, specifically with possession and sale of moonshine whiskey and wort beer. He never was sent to jail but faced a heavy fine. Clara and Louis had two sons, Loyal and Warren (Sonny). During World War II, Warren was a high school student in Wausau, while Loyal studied at Ashland College. In 1943, Loyal joined the military while attending Texas A & M and served his nation stateside.

Louis and Clara ran the resort and lodge from 1930-1950. During this time, they worked hard at building a well-known resort, raising two sons, and serving 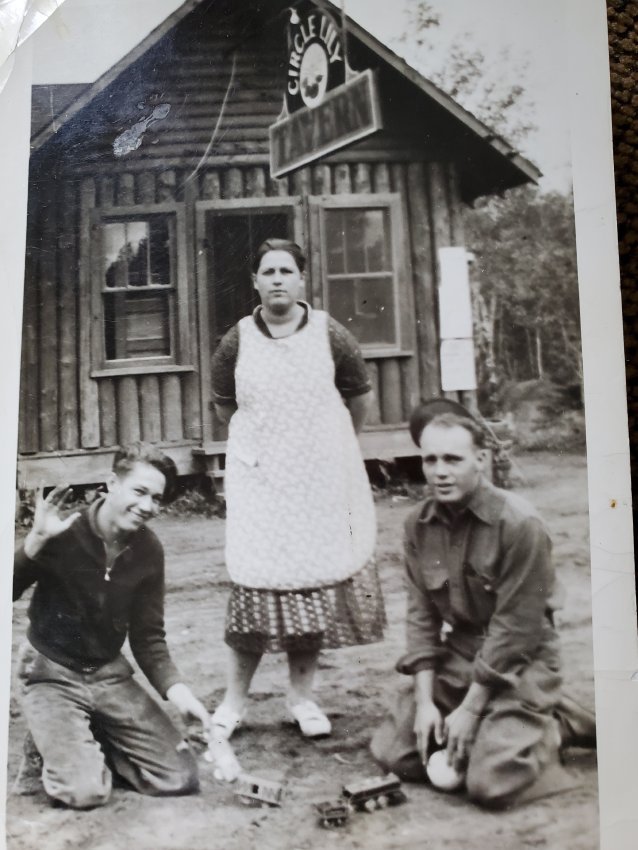 wonderful meals and experiences for their guests. The Circle Lily Lodge was built as a hunting and fishing lodge and soon hunters brought their families for vacations as well. There were six cabins, and many of them were along the Manitowish River shore. In the 1930s, during deer season, hunters could stay at the lodge for $2.50 a day. Louis extended hunting trips for guests and friends by taking them on Canadian moose hunts. In 1937, his party brought back two moose, one weighing 1,200 pounds fully dressed for display for all in Manitowish to see.

The lodge became one of the most important community gathering places for families from Spider Lake (which became Manitowish Waters in 1940), Manitowish and Mercer. The American Legion Northern Lakes Post 424 met there often, and Louis served the legion in many capacities such as commander and service director. Clara was very active in the American Legion Auxiliary, and many of those meetings were at Circle Lily Lodge.  For example, during the 1944 season, an Armistice Party was held at the lodge followed by a turkey shoot.  People from miles around could bring their guns and enter the contest by shooting targets or trap to win their Thanksgiving turkey. 1945 found the Circle Lily Lodge hosting a “March of Dimes” party sponsored by the Auxiliary to raise money to fight polio. Many wedding parties and birthday celebrations were held here as well.

Louis gave of his time to help out at Camp Mercer CCC Camp 660 in the 1930s. For example, he refereed a Sparta District Boxing Match at the camp in 1937. In 1939, he and others met at Circle Lily to form a local athletic club. Louis was very involved in conservation practices as well. He served on the Iron County Fish and Game Committee. In 1945, he worked very hard to close the deer season in Northern Wisconsin because there were so few deer. Through the hard work of this family, the Circle Lily Lodge became a tourist destination as well as a welcoming gathering place for those who lived and worked in the area. 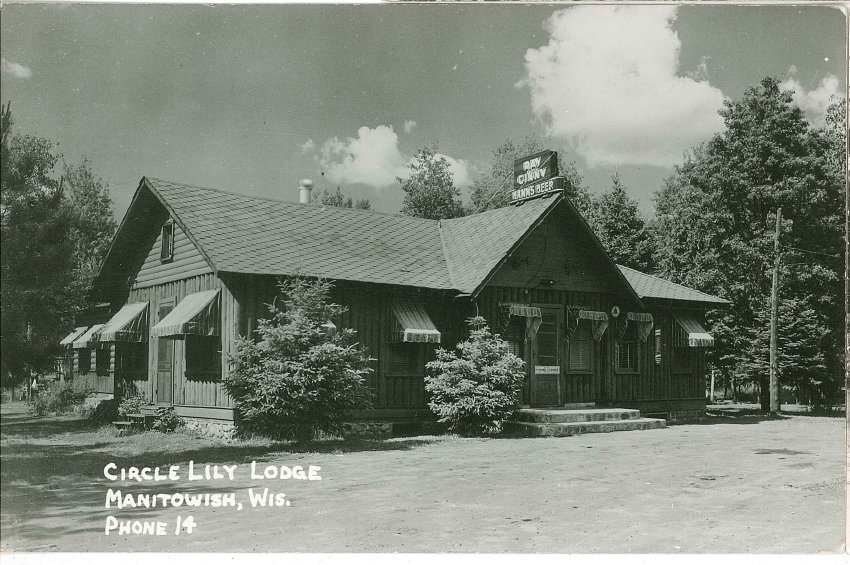 In 1950, Clara and Louis sold their place on a land contract to Ray and Virginia Newbold.  Right after taking over Circle Lily, the lodge was designated as a place for dinner for a group of Wisconsin beauties. Miss Milwaukee, Miss Green Bay, Miss Neenah-Menasha, Miss Madison, Miss Kenosha and Miss Waukesha had dinner there, and then went on to an “old-fashioned shindig” that was held at the Manitowish Waters’ town hall. Miss Milwaukee, Gloria Lange, went on to become Miss Wisconsin in 1950.

The Newbolds ran a successful business until 1955 before unforeseen changes altered the property. Highway 51 was built right through the 40-acre property. The quiet hunting and fishing family resort was no longer the same, and business was affected greatly. The Newbolds continued the tradition of wedding receptions and parties as well as the everyday service of the lodge. By 1962, the Newbolds had to default on the land contract, and the alcohol license reverted back to the Laffins. The Laffins had built a home on Spider Lake in Manitowish Waters, and Louis worked on the highway project through his job with Koshak Construction in Park Falls. The Laffins were no longer interested in owning the place.

In 1963, Marge Feht and her friend Lois Fink bought and operated the Circle Lily Lodge. Marge was considered a “wonderful cook,” and Lois ran the bar and did odd jobs around the place. It is said that she always had her tool belt on unless she was bartending. 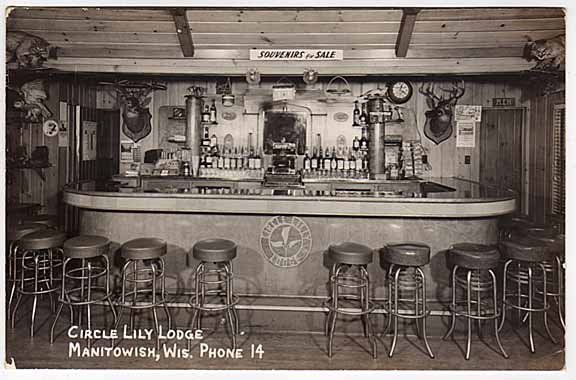 In 1967, the friends sold the establishment to Edward and Carol Dimmick who owned the business until 1975. The Dimmicks ran the Circle Lily Lodge as a bar, restaurant, and country and western dance destination. Cribbage was the rage in the bar circuit of the Manitowish area, and many a cribbage match was played here. Line dancing was very popular at the time, so country and western bands like “The New Rebels” performed at Circle Lily to large crowds of dancers. Birthday parties were still held like the one for their son Michael, and the guests were served a great meal along with fun in the restaurant.

In 1975, the Circle Lily was sold to Roy and Cheryl Beranek. They had two young children, and they worked very hard at the business. The place was open seven days a week, and nightly specials were served Wednesday through Sunday. In January of 1976, disaster struck the family as a fire totally gutted the building and all of their possessions. The community rallied and helped through donations and fundraisers.  A 1977 Iron County Miner article noting a dinner held by Art Laha at Circle Lily Lodge demonstrates that it was quickly rebuilt. 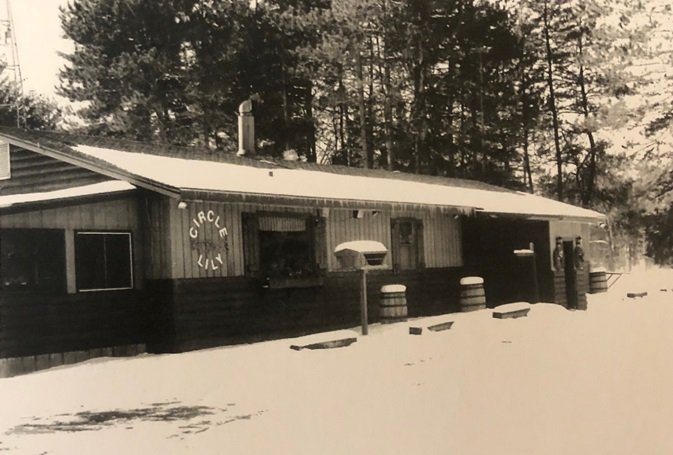 In 1998, the Circle Lily Supper Club burned to the ground again, and when fire fighters arrived, there were flames rising to the treetops surrounding the building. It was believed the fire started in the kitchen.  The owner at the time was Kurt Potter.

Hawks Nest Outfitters built a new building on the site and ran their business for many years. They rented kayaks, tubes and canoes for trips on the Manitowish River. People enjoyed the day trip adventures until the location was closed around 2016-2017.

River’s Edge Lodge and Outfitters, established in 2019, is the present business on the site of the old Circle Lily Lodge along the shore of the beautiful Manitowish River and the recently developed Heart of Vilas County bicycle trail. Owners Chris and Renae McMurray have family ties to the area since mid-1936. River’s Edge is a full-service outfitter, renting canoes, kayaks, tubes and bicycles. In addition to lodging on site, they also serve a unique selection of wines and beer in a cozy Northwoods atmosphere.

Other Resorts at this locations since being founded in c1930