In 1931, Elsie DeWoody described their first family trip to the Northwoods. In her journal, she wrote, “We packed my Model T with clothes and tent. We washed and ironed for days and were finally ready to start. Grandpa and Grandma said that we were crazy starting out with no definite destination, only up North.”

After a few rest stops, Elsie and her husband Loren, along with their son Loren and two daughters Helen and Lorraine, had made their way from Waukegan, Illinois to Manitowish Waters. They camped near the water and planned to spend their days fishing and swimming until the end of August when the kids were due back for school. This is how the DeWoody’s decided to manage the Great Depression—escape to the Northwoods and live simply.

The summer of 1931 was surely a memorable one for the DeWoody family. Not only did they become familiar with the ways of the Northwoods, but they also managed to become quite the group of fishermen. In an entry made on September 3rd, Elsie wrote, “so here we are 80 muskies in 90 days of fishing by the calendar. Not so bad…so ends our 1931 vacation in the north.”

In 1932, they returned with the same energy and vigor as the previous year, fishing nearly everyday and even getting to know some of the locals. Elsie made acquaintance with Mrs. Doriot, a resort owner in Manitowish Waters, and spent many afternoons with her while Loren fished with Bill Kahn, a well-known fisherman in Manitowish Waters.

In October of 1933, Elsie wrote, “We couldn’t come up this year and talked it over and decided to save money and move up for the duration of this depression…we bought a little piece of land on Dogwood Lake and will start a resort of our own.” And so, the DeWoody family left their lives in Waukegan to become resort owners in the Northwoods. Little did they know, their residency in the Northwoods would long outlast the Great Depression.

The DeWoody’s built a nicely furnished resort on Dog Lake named Waukegan Lodge, and it appears there was little trouble adjusting to their new home. They lived at the resort while raising their three children. This arrangement was only temporary, as the children would soon graduate, and by 1944, Loren and Elsie found themselves as empty nesters. They decided to move to the Manitowish Waters chain of lakes. There, they bought a getaway owned by a banking family from Illinois on Fawn Lake. 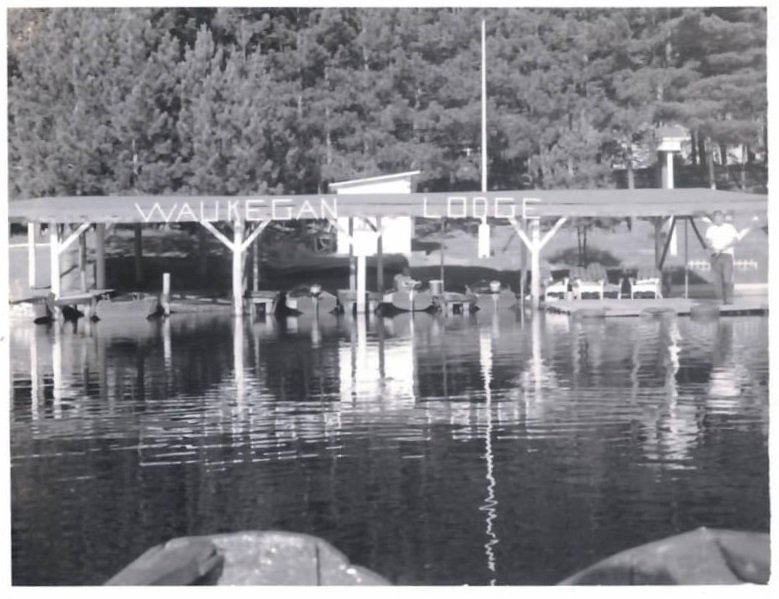 Although the property was not being run as a resort, it had the makings to accommodate guests comfortably. There was a sand beach that extended the length of the frontage. Loren, who was a talented builder,  constructed a dock system with several slips. Later, a roof  was added to shelter boats from inclement weather. On the shore, there were two outbuildings. One served as a boathouse and another as a pump house. Loren cleverly converted the buildings to rentals. The boathouse was converted to a duplex that could accommodate two families or a larger group. The pumphouse was converted to a small cabin suitable for one family. Further from the lake was another cabin named Lakeview. It was advertised as a four-room cottage with a bath. And finally, a smaller cabin called Retreat was advertised as a one-room cabin. 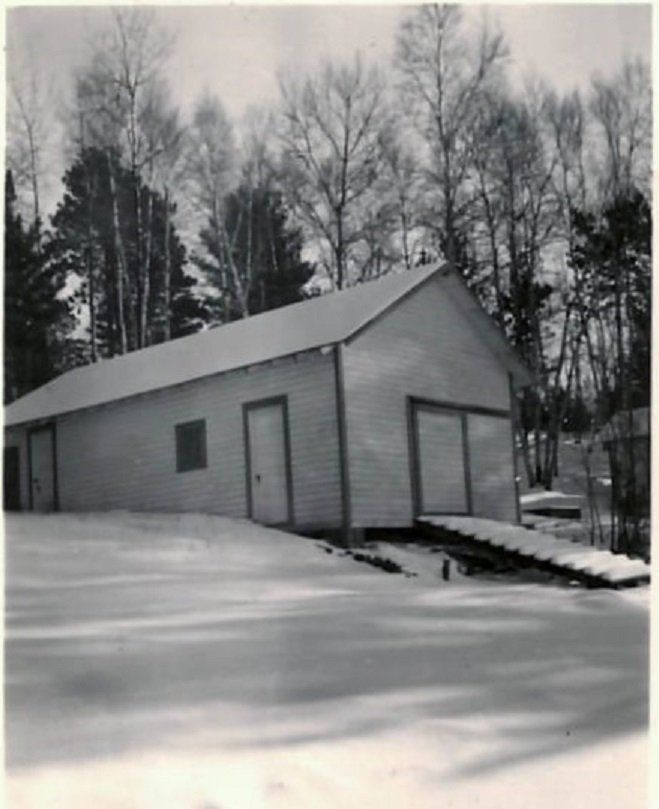 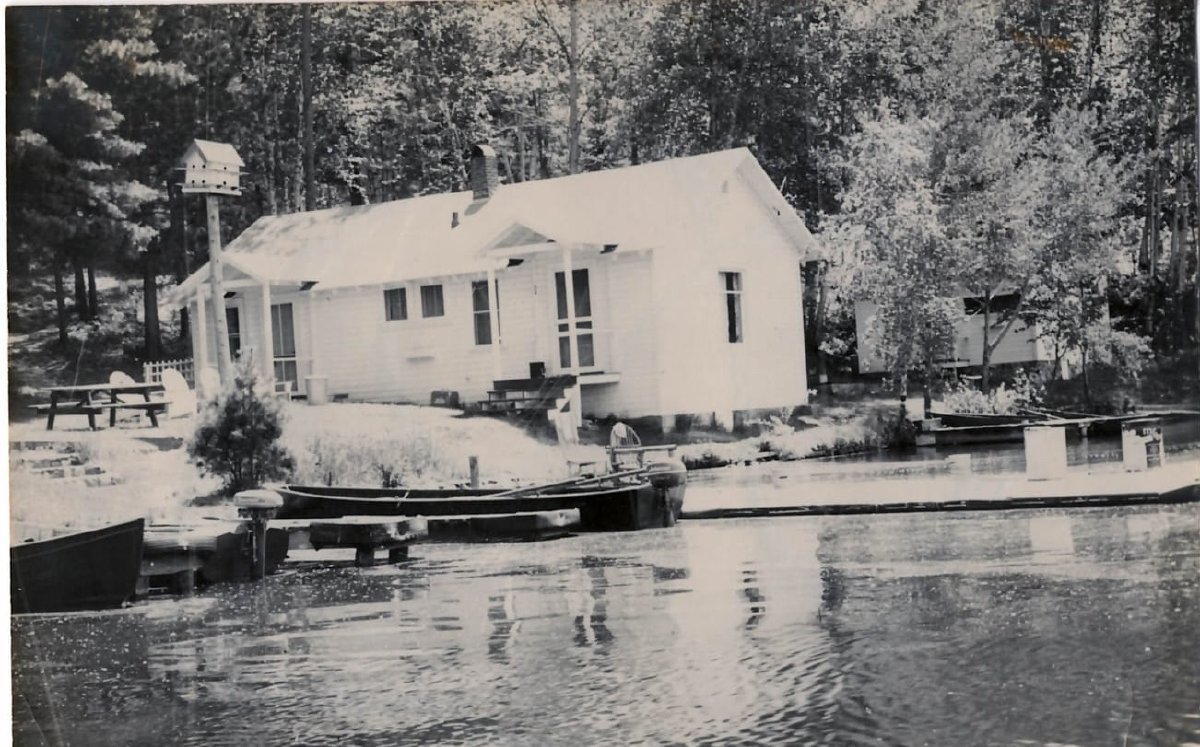 Loren and Elsie moved into a larger home set back from the lake on the hill. Several decades old, the home had a cottage-like character that embodied the Northwoods. There were several windows providing ample views of the lake, wood siding painted white with green trim, and a large stone fireplace that dominated the living room. It was said that the original owner collected a stone from every U.S. state and territory to use in the fireplace. From here, the couple worked hard to run their resort as any resort owner did in the Northwoods. 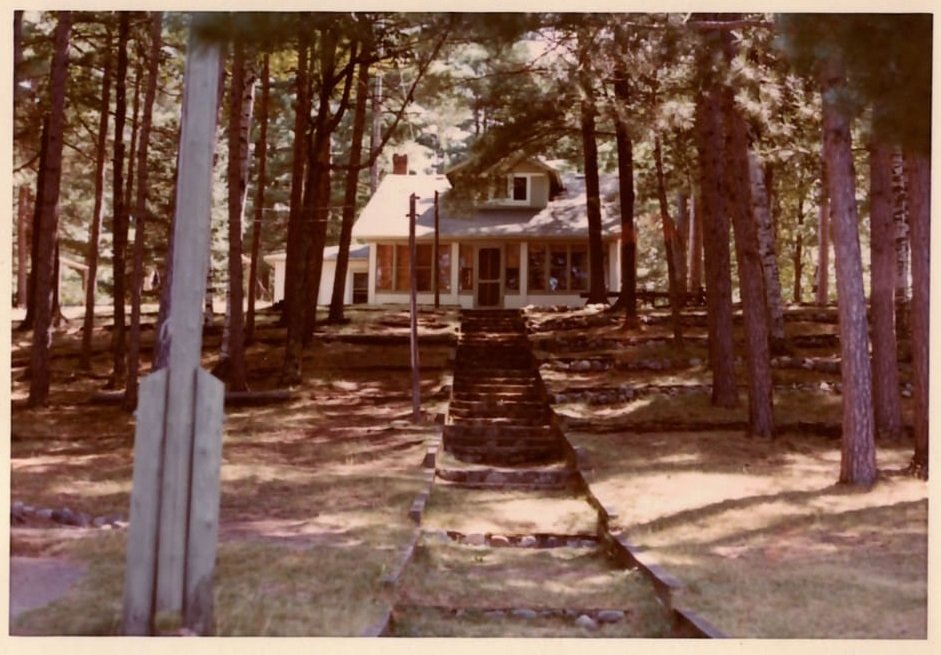 The resort itself was primarily a sportsmen’s resort. Advertisements were aimed at attracting fishermen and sometimes hunters, and the grounds had all the amenities for a serious outdoorsman.

As a result of Elsie and Loren’s work, close friendships developed amongst the guests. Several pictures of guests gathering at an outdoor oven around picnic tables and advertisements referencing Sunday night chicken dinners speak to some of the events the resort hosted. Elsie’s annual newsletters illustrate how these social gatherings brought their guests close. Newsletters were sent in the early spring just prior to the lake thawing and included notes about the whereabouts of locals, family updates, or introductions of new guests. Elsie would also include a short tale or two to add a little humor. “We have a pair of sunglasses here for a certain someone who likes to read while trolling with his line wrapped around his finger. Some day, Bud, your finger will be missing.” 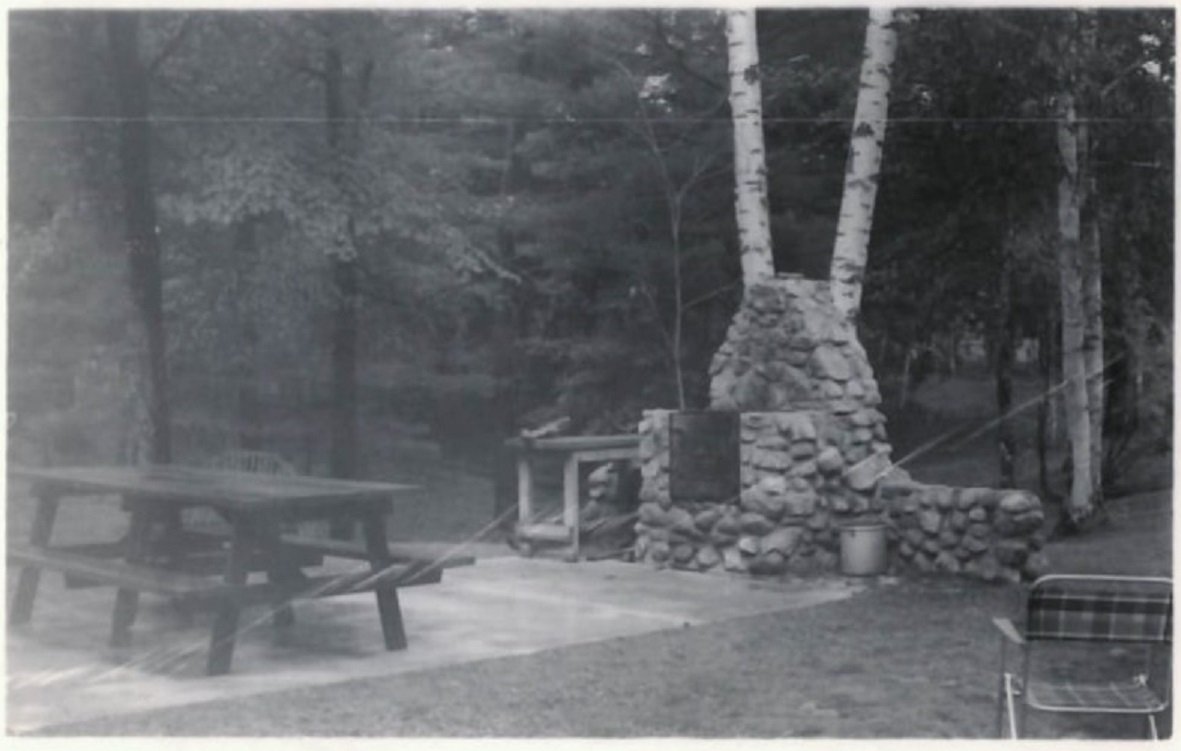 In 1948, when Elsie decided to discontinue the newsletter, she wrote she received communication from guests that they were waiting for her annual update and hoped to be getting it soon. No doubt, the DeWoody’s were proud of the community-like atmosphere they had created with their guests.

Loren and Elsie captured the mystique of the Northwoods in their advertisements for Waukegan Lodge. One photograph from 1943 shows Elsie at a sports show in Chicago. Her booth is complete with a large whitetail deer and musky mount, several furs, snowshoes, and sawed pine and birch trees. No doubt those adventurers unfamiliar with the area found the display appealing.  Additionally, Elsie used her interest and talent in writing to pen comical descriptions of the resort for potential guests. Particularly humorous is her description of the “main lodge,” or outhouse as it was more commonly known, at the original Waukegan Lodge on Dog Lake. She writes, “The picture below shows a view of the Main Lodge where our guests assemble morning and night for a common cause, and to commune with nature among unfamiliar surroundings…” 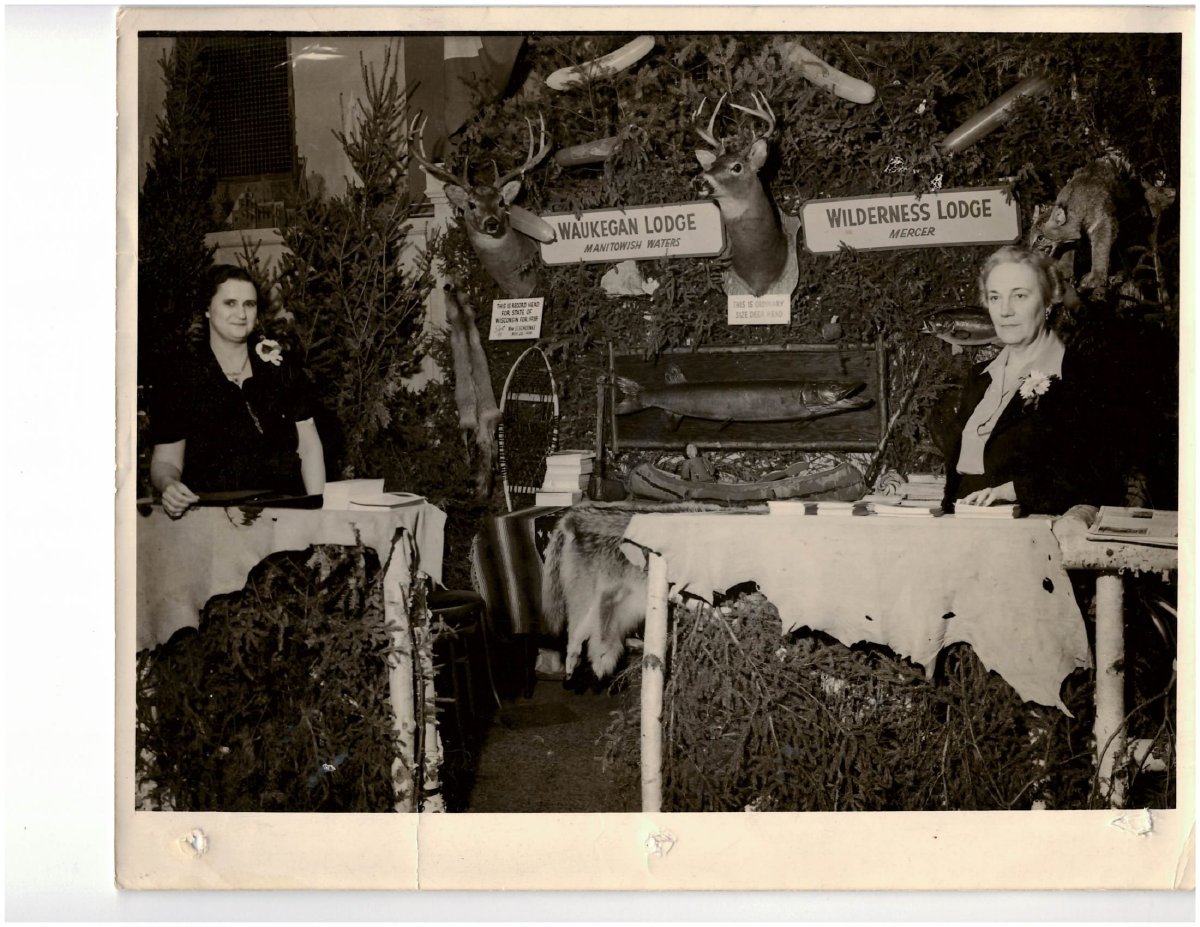 In her newsletter dated 1948, Elsie informed her guests that her daughter Lorraine (Toni) and husband Arnie would take on partial ownership of the resort. This would be the arrangement until 1955 when Toni and Arnie became sole proprietors. Toni and Arnie ran the resort, much like their predecessors, until 1977 when it was sold to Michael and Maren Moll. 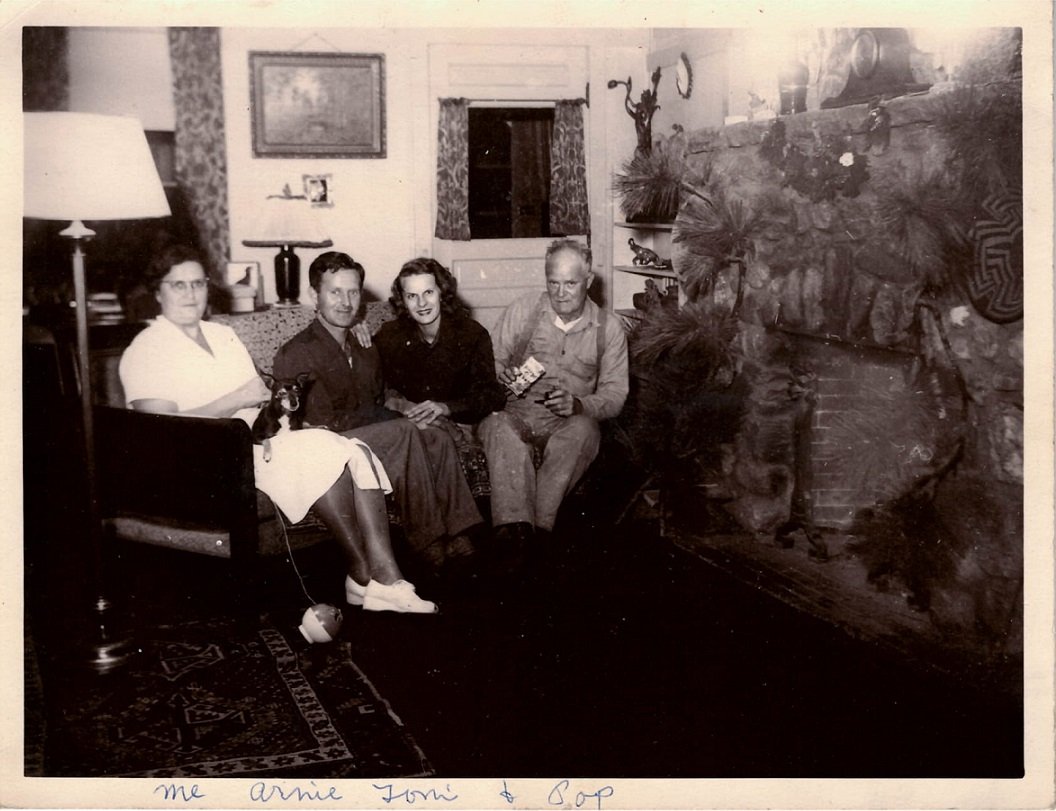 Elsie and Loren with Lorraine and Arnie Clare

Other Resorts at this locations since being founded in 1944