“If I were asked where the finest fishing waters in Wisconsin are located, I would unhesitatingly say the headwaters of the Manitowish,” said Joe F. Ilg Sr. in 1907 in an interview in The Inter Ocean, a short-lived newspaper out of Chicago. The interview highlights Ilg’s passion for the Northwoods, fishing and his camp near the Rest Lake Dam. This camp would go on to be one of Rest Lake’s most prominent resorts.

Ilg had vacationed along Rest Lake since the early 1890s. Between 1916 and 1917, he made his first land purchase along the western shore with a fantastic view of Fox Island. In the early years, Ilg relied on tent camps for accommodations.  He enjoyed strong friendships with local Ojibwa families, and an “Indian Camp” or trading post operated next to his property in 1918. 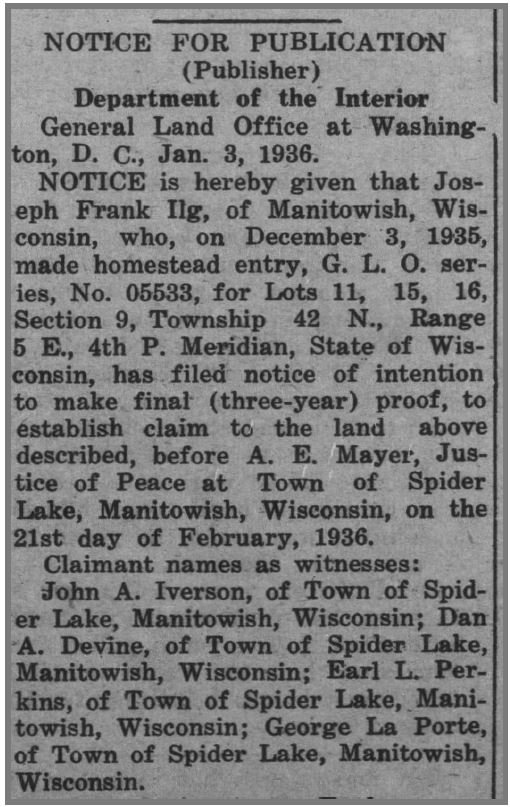 Officially running from 1936 to around 1973, Ilg’s Resort (or Ilg’s Camp) was located on the western shores of Rest Lake right off County Road “W,” which today is Ilg Road, and was owned and run by the Ilg family, specifically Joe Ilg Sr. and his son, Joe Ilg Jr.

The older Ilg first came to this land from Chicago in the early 1900s, establishing a fishing camp near the Rest Lake Dam as reported in the Montreal River Miner and Iron County Republican paper in 1914. Joe Ilg Sr. (1872-1955) was a Grand Trunk railroad executive, and he and his wife Leonore spent many years in the Manitowish area. According to a notice in the Iron County Miner, the Ilgs officially bought the land in 1935: “Joseph Frank Ilg, of Manitowish, Wisconsin, who, on December 3, 1935, made homestead entry…”

In the 1930s, the resort had 10 log cabins with three or more rooms in each, with a main lodge that served meals to hopeful fishermen and adventurous 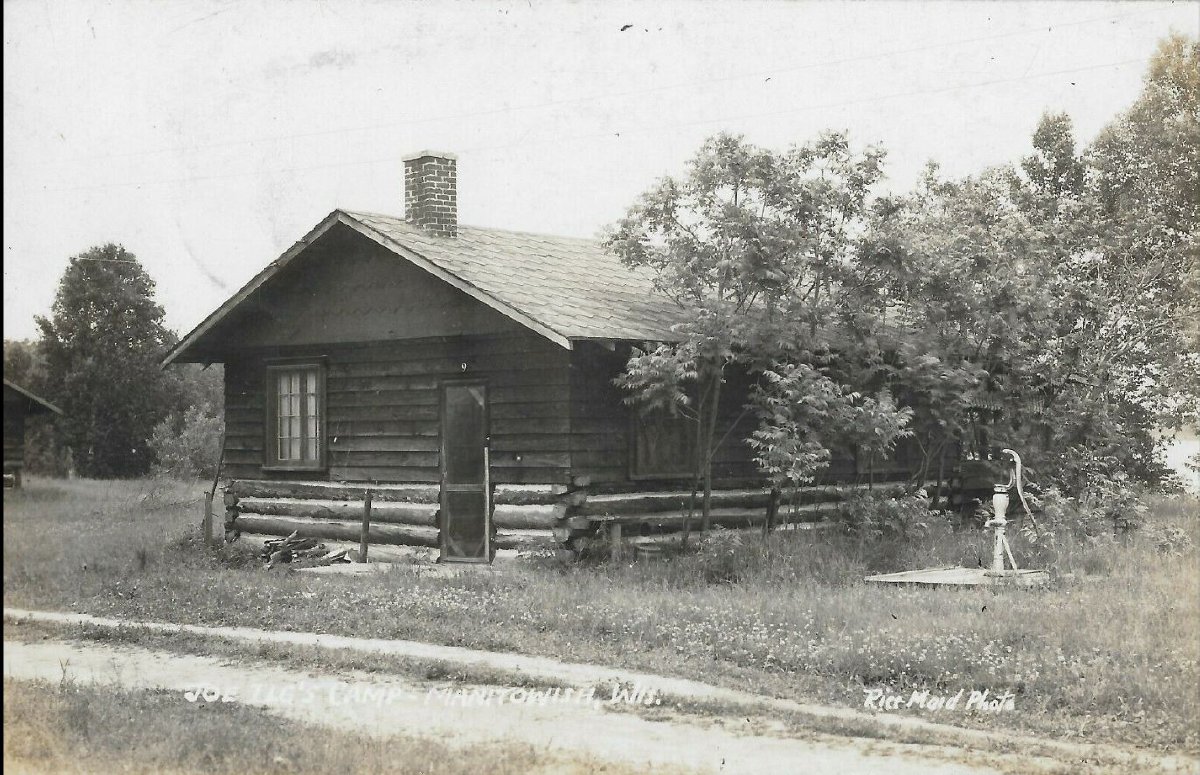 families. He and his wife were members of the Manitowish Waters region for 40 years. His obituary in 1955 stated: “Everyone in the Manitowish Waters and surrounding towns knew Joe Ilg and respected and loved him.”
Sometime in the 1940s, ownership passed to his son, Joe Ilg Jr. In the 1940s, ’50s and ’60s, the resort advertised its “…mosquito controlled grounds and sandy beach are ideal for families and we cater to the children.” The resort also catered to archers, and it featured electric refrigeration, Alumicraft boats, and proximity to stores, restaurants and churches. Rates for cottages in the 1960s ranged from around $65-$100. 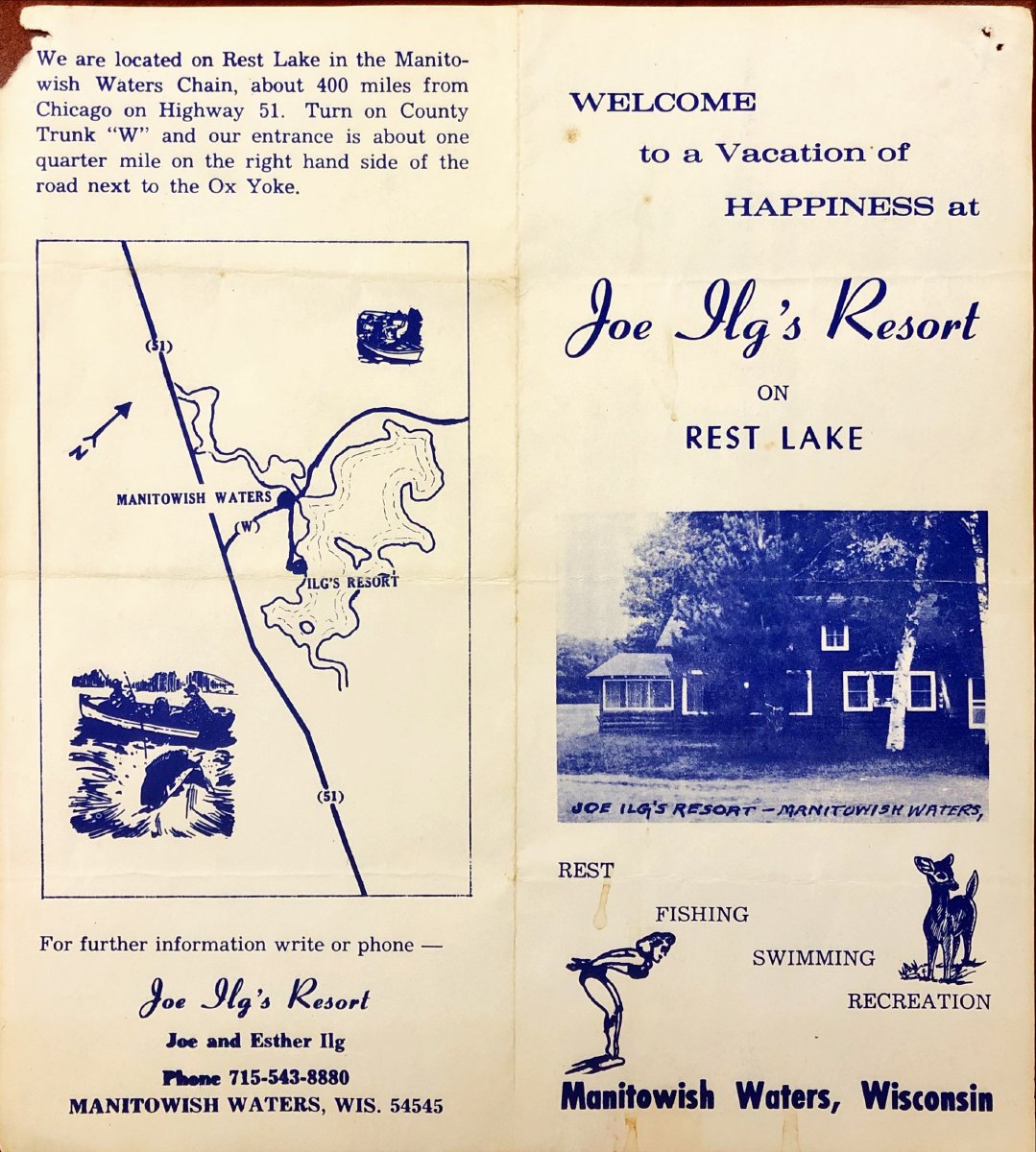 Ilg’s Camp was a place where Joe and his family could celebrate their love for the Northwoods and nature. This enjoyment was something they had to share with others, turning Ilg’s Camp into Ilg’s Resort.

Other Resorts at this locations since being founded in 1917