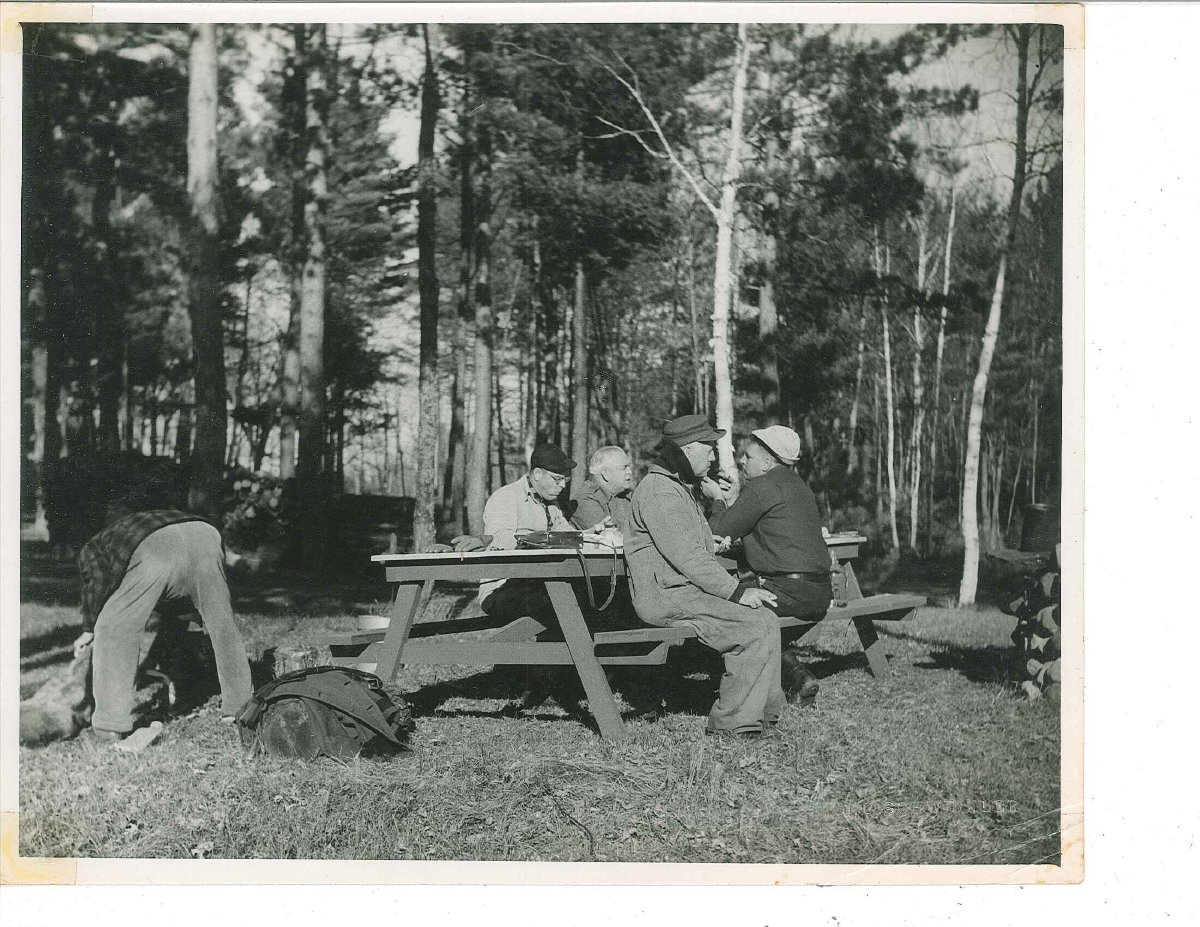 Located on the banks of Benson Lake, there has been speculation that Lakewood Lodge was initially built by the men of the Civilian Conservation Corps (CCC) at Camp Mercer.

The beautiful property was first sold to Ed Hunter Sr. in 1934. Hunter wanted to create a Northwoods lodge for his family, and he named it Hunter’s Camp O Woods Lodge. He built the compound for his family, and the cottages only had sinks and toilets. There was a shower house for bathing.

Hunter was a lawyer and became district attorney for Oneida County. He had an office in downtown Minocqua. Later, he went into real estate, and the business became a three-generation enterprise. His son, Ed Jr., became a guide for many of the Manitowish Waters area resorts.  Later, he joined his father and opened a real estate office in Lake Tomahawk.

The property included six cabins (Chickadee, Turtledove, Cricket, Skylark, Brown Thrush and Oriole), an icehouse, shower house, garage and the main lodge. Unfortunately, the main lodge has since been torn down and a private home was built on the site. Renee Dwyer, a guest years later, believed that they may have used the original fireplace in the home. Fortunately, the six cabins, though many include renovations, are in their original state.

In 1946, Hunter sold the resort to Harland and Lorraine Jones of Kenosha, WI. Harland (1913-1990) and Lorraine owned and operated Lakewood Lodge from 1946 until 1990. They rented out all six of the cabins and resided in the main lodge. The main lodge also included single rooms for rent.

Prior to owning Lakewood Lodge, Harland was employed as a truck driver in Kenosha, WI. He worked for a trucking company owned by Elaine and Laurence Glerum. The Glerum family had been introduced to the Northwoods and spent time in Hazelhurst. Now, they were excited to stay at the resort in Manitowish Waters.

One of six children, Renee Dwyer, daughter of Elaine and Laurence, recalls timeless memories of Jones Lakewood Lodge. The children would enjoy spending time outdoors doing activities such as using rowboats, catching frogs on the river, and spending time at Little Star Beach. Other summer activities might have included watching the bears at the Manitowish Waters dump and experiencing the thousands of stars of the Northwoods night sky. As the kids got older, they knew if they rowed out into the middle of Benson Lake after 10:30 p.m., the mosquitos would be gone, and they could watch the shooting stars.

The Glerum family would spend four to six weeks each summer at Lakewood Resort. When they first started coming, many meals were prepared by Lorraine Jones. Later, Renee’s mother and grandmother did cook from their cabin. Renee and her siblings would explore the woods around them and putter in the river. One sister declared that there could be pearls in the clams, and the game was on. Finally, that sister actually found a small pearl, and all became believers.

The upstairs of the garage had a great playroom with lots of things for kids to do, and so children were rarely bored. Harland built a shuffleboard court, a horseshoe game area, a firepit and picnic area for the guests. The Jones often joined their guests for a picnic on the point.

Renee, and other annual guests Jim Cody and Barbara Mitchinson, all remember knocking on the kitchen door at the lodge, and Lorraine would sell the kids ice cream. They also remember making s’mores and watching Harland fish off the point at night.

Harland would scold the kids if they did something wrong but always told them they could make up to him by doing something good. According to Jim Cody, Harland would give them little resort jobs to do, and they really enjoyed helping him. Jim shared, “One time I cut up a door that didn’t need to be cut up, and he didn’t get mad. He just said we would figure out a good way to use the wood.”

Although Harland and Lorraine did not have any children of their own, they cherished memories of their annual guests and treated those families and children as if their own. Their property clearly exuberated a family-oriented atmosphere where guests felt Lakewood Lodge was their home away from home. The Glerum family and other annual guests such as brother and sister Barbara Mitchinson and Jim Cody were fortunate to have stayed at this resort for many years. Both families yearned to come back every summer. The Cody family felt like the Jones just took them under their wing, and they kept coming back each summer. Harland and Lorraine truly admired their guests and loved northern Wisconsin.

Harland was a great fly fisherman and could cast out of a rowboat, and the boat never moved. The front of the property had a lot of sturgeon. Guests loved to watch as the sturgeon leaped out of the water. One time, a guest caught one, and it was so strong that it just towed the boat down the river.

Harland supplemented their income by working at Trueflight Manufacturing Co. as a manager. He was civic-minded and served as a director on the Manitowish Waters Chamber of Commerce. In later years, they spent their winters in Kenosha, WI or Altamonte Springs, FL.

In 1990, Harland passed away, and the resort was sold. The Glerum, Cody and Mitchinson families had developed a deep love for the place, and when the opportunity arose, they were able to purchase the very cottages that sheltered them in that special place of childhood memories. Harland and Lorraine really wanted the place to be protected and left to those who loved the resort, and for the natural setting not to be disturbed.

When Jim Cody bought his cabin, he used materials from the torn down lodge to remodel the inside of his place. He used everything he could from the lodge to keep what part of it he could.

The lodge and land around it were sold to a Mr. Dibble, and he built a new home. The largest cottage was sold and turned into a home by the Butlers. The rest of the cabins still maintain the look of the old resort. When asked what this place and these people meant to her, Renee said, “They opened up their place to us to experience the Northwoods. They gave joy to us as children and helped us open our hearts and minds to the beauty of this place we call Manitowish Waters.”