“I’ve had it. Let’s go north,” uttered a disenchanted Michael Moll after another long shift at American Motors. He had worked there from 1970 – 1977, and prior to that, had run a small vegetable and deli market with his wife, Maren, in Lake Geneva. They had visited the Northwoods before, and like many tourists visiting from “the south” during summer months, felt like this would be a perfect place to move.

So Michael and Maren, along with their two children, made the bold decision to move north and try their hand in the resort business. Maren recalls being a little apprehensive at first given the fact they had no experience running a resort, and Manitowish Waters was far different than what they were accustomed to. 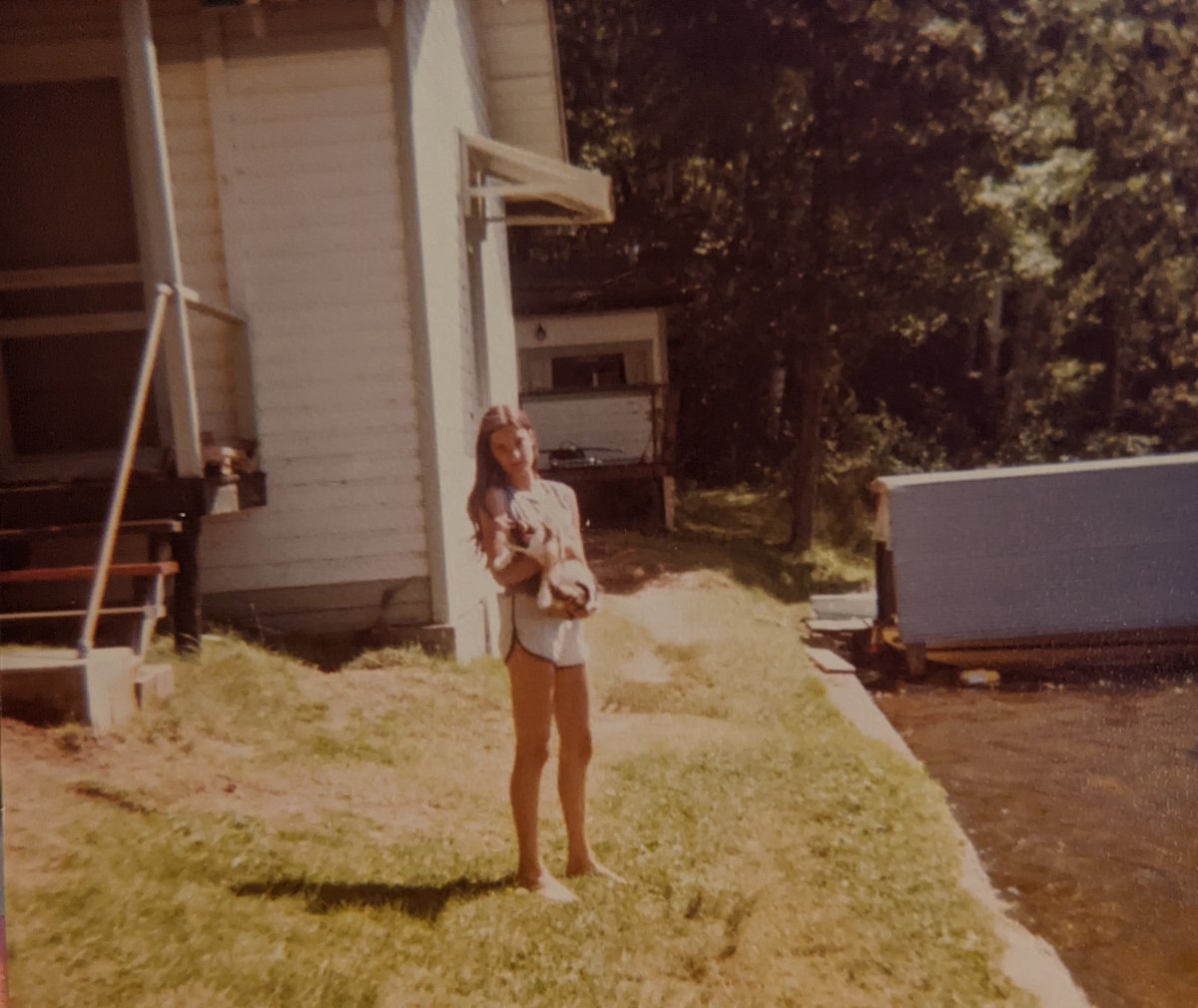 Maren and Michael’s daughter, Jody Bognar, remembers one of the first winters. “I recall going nearly a week without water because the pipes froze and burst from -30° weather. I would go to my grandmothers to shower. I was in junior high, and I wouldn’t dare go to school without showering!”

Despite a few setbacks like this, Maren and Michael realized they had all the training they needed. Michael, who enlisted with the United States Marine Corp. at age 17 and served in the Korean War (1951 – 1953), no doubt had the discipline and work ethic to run a successful business in the Northwoods. Unfortunately, he was well acquainted with the cold, too! In one battle, the Chosin Reservoir Battle, he had suffered extreme frostbite in his hands and feet. He was skilled in many trades and was willing to wear whatever “hat” was needed to get a job done.

Maren, who was raised by a single mother in Chicago, spent much of her childhood doing whatever was needed at their family-owned tavern. She explained, throughout the WWII era, people did whatever they could to make ends meet. There was not a lot of help, so people found themselves doing jobs they were not accustomed to. She learned at a young age what hard work and ingenuity was all about, a necessary skill when running a Northwoods resort.

The Molls bought the small resort called Waukegan Lodge on Fawn Lake from Arnold and Toni Clare in 1977 and renamed it Moll’s Timber Lodge. The resort had five cabins. Lakeview Cabin and the Duplex, as it was called, were only a stone’s throw from the water and were a real prize for someone looking for beautiful, unobstructed views. Lakeview was small, suitable for one family, while the Duplex was two cabins combined by an adjoining door to accommodate larger groups. Both were converted to rental cabins by the previous owner and required few updates. Another cabin, called Hilltop, was the largest cabin with two bedrooms and two sleeper sofas. It could house up to six guests. Another small cabin at the top of the hill near the lodge, called “Retreat,” could accommodate two guests. 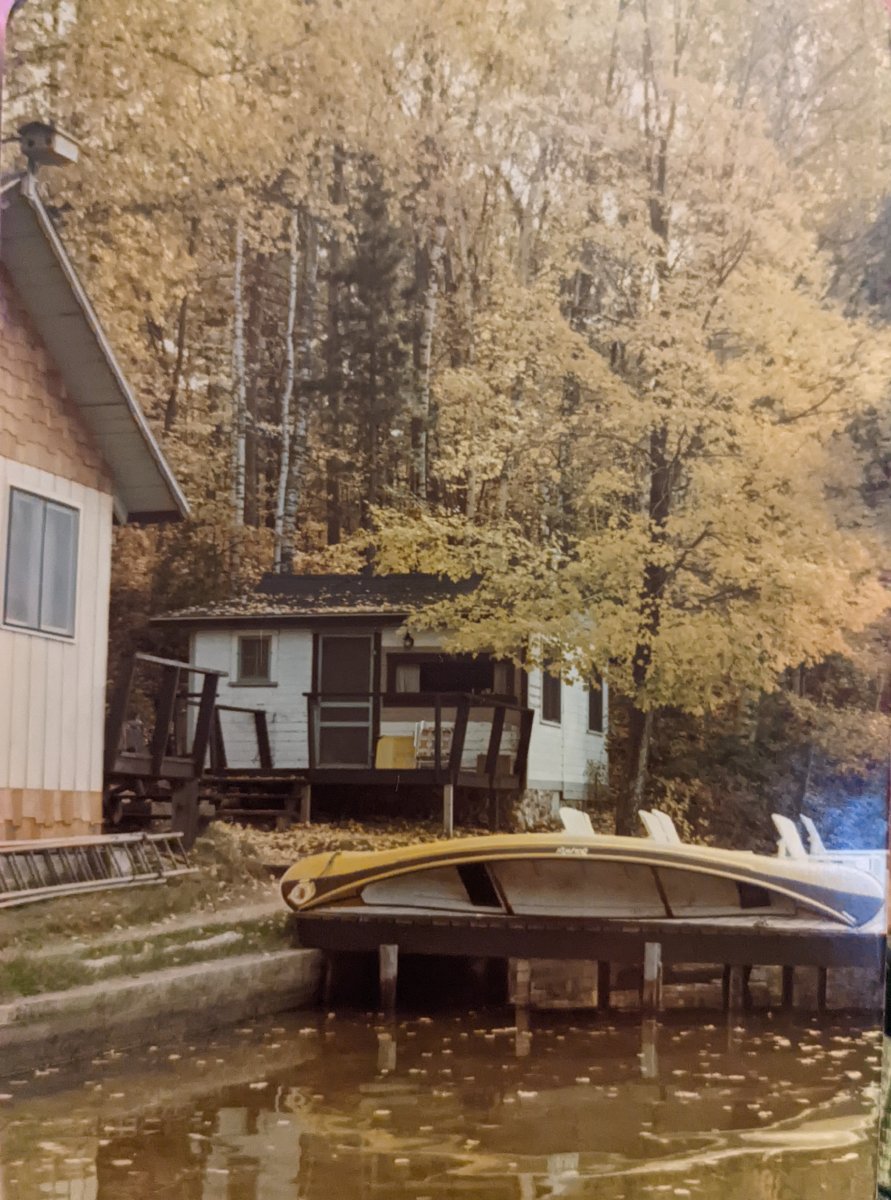 In the back, overlooking the resort cabins and nestled amongst the tall, mature white pines, was the large home where the Molls lived. It was built by the O’Hares, the original owners of the property, in the 1930s and its proximity allowed the Moll family to be on call for their guests. 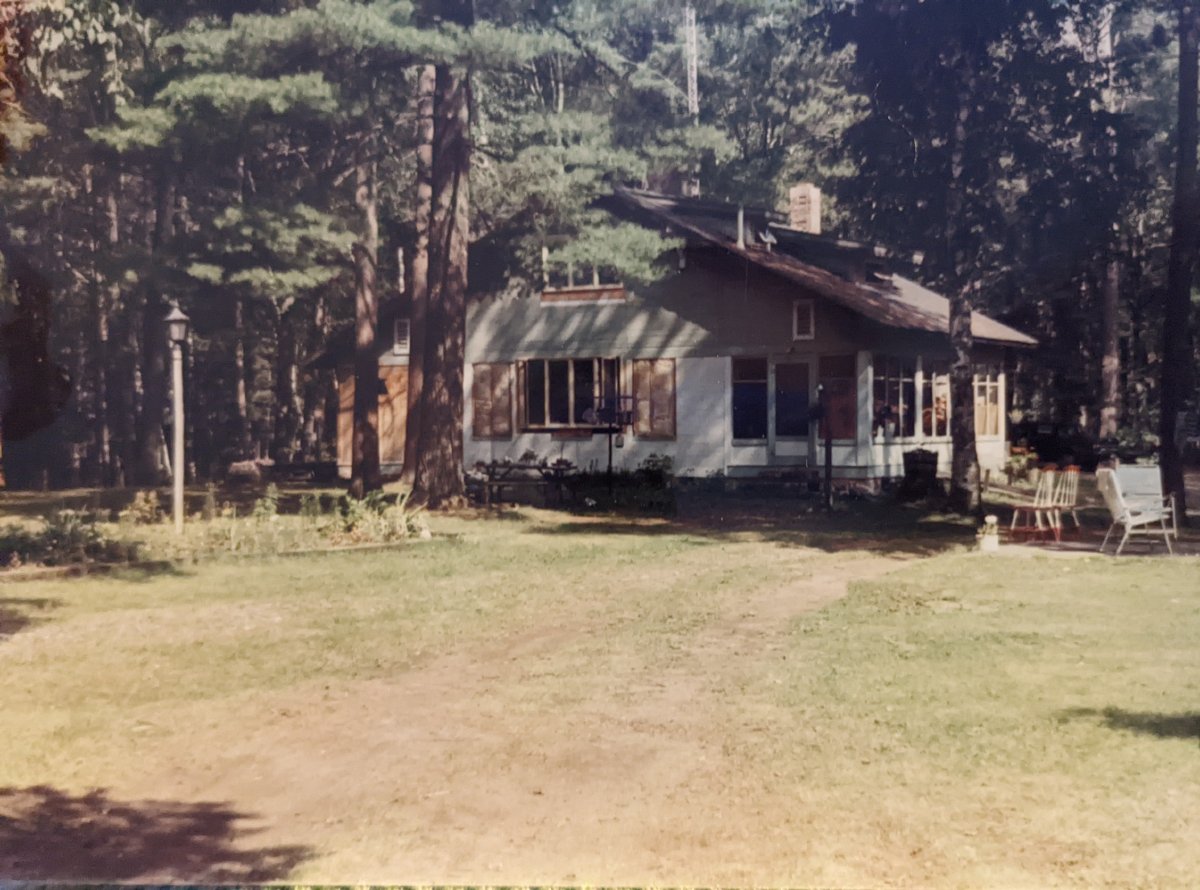 Surrounding the cabins were picnic areas complete with tables, grills, and even an outdoor stone oven.  Like the previous owners, the Moll’s encouraged outdoor gatherings. Jody recalls how some guests would cook snapping turtle soup or boil crayfish.  Later, in the 1980s, a larger, ranch-style home was built a short distance from the water that was also used as a year-round rental for winter guests and snowmobilers.

The shoreline was picturesque, typical of what one thinks of when they envision a quiet lake in the Northwoods – clear, calm water, old growth pines, and a sandy beach inviting swimmers to spend their day.  Another attraction for the guests, who were most often fishermen, was the covered boathouse. Maren recalls how fishermen returned year after year for the convenience of keeping their boats clean and dry under the shelter, and the Molls were sure to advertise this to potential guests in the Chamber’s resort advertisements.

Maintaining a resort is a team effort. Maren explained how she and Jody worked hard to keep the cabins clean, while Michael and their son, Joe Moll, kept the property in order. It was a Northwoods resort; the cabins were clean and the grounds were well kept, but it was not a five-star hotel. Maren recalls some guests, accustomed to more luxurious accommodations in the city, did not always fare well, but the fishermen and their families enjoyed themselves. The men would take the boats out fishing, while their wives enjoyed the local shops, restaurants, and beach. 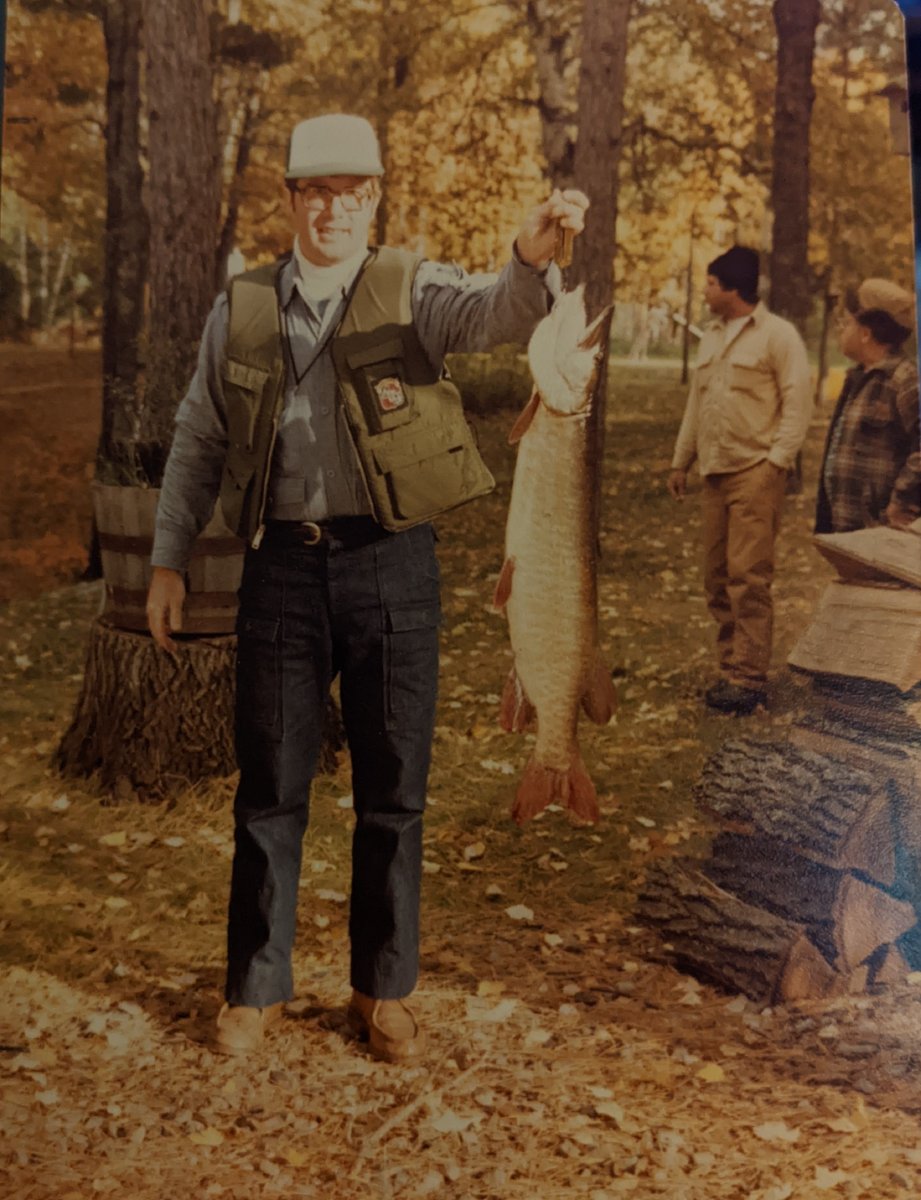 Like many resort owners of the day, additional income was always needed because the season was so short; the resort typically opened in May and closed in October. By the 1980s, Maren was involved in town politics as well as county government and taught community enrichment painting classes for Nicolet College. Michael did work for local contractors and caretakers. Perhaps the most enjoyable of these side jobs was opening an antique store near the main lodge on the resort grounds. A small barn was transformed as a place to display the many treasures collected over the years. In addition, Michael, who was a skilled woodworker, displayed and sold some of his woodcarvings. As one guest described, “The atmosphere of looking for that special antique in a cute little barn was always fun for the tourists. The barn interior was unique, and the antiques were displayed in interesting ways.” 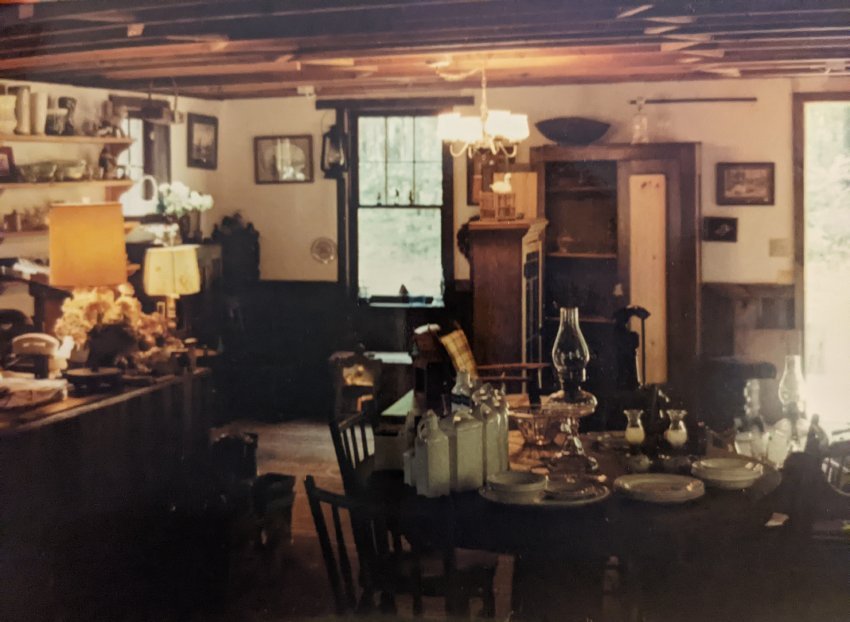 Maren and Michael sold their resort in 1995. Maren became increasingly involved in local politics – first with the Chamber of Commerce, serving as Chamber Director from 1979-81, and then as town chairman. Michael continued as a caretaker and handyman. They built their retirement home along Highway 51 with a small addition for their gift shop where they would continue selling their treasures to collectors.

Other Resorts at this locations since being founded in 1944