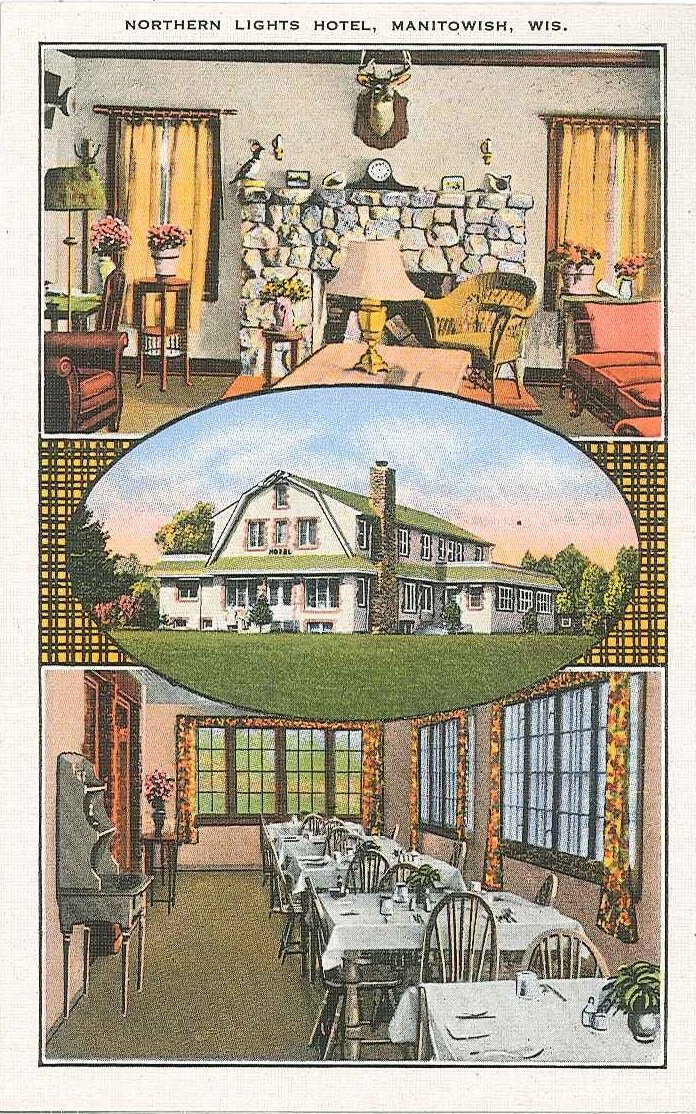 “Supreme Comfort in a Wilderness of Beauty”

As seen on a map in the 1957 Manitowish Waters Chamber of Commerce Booklet, the Northern Lights Resort was located on a point extending into Rest Lake. Between the years of 1931 and 1958, travelers would have taken Highway 51, across the Rest Lake dam to the

resort (today that road is Country Road W).“Situated on U.S. Highway 51 on the shore of Rest Lake, one of the famous Manitowish chain of 14 lakes. Overnite from Chicago on the C. & N. W. Ry,” states an advertisement from the 1936 Chamber of Commerce Booklet.

In order to stand out amongst the many other fantastic resorts on Rest Lake, the Northern Lights Resort had to advertise its amenities, which provides an insight into what vacationers sought out in the Northwoods during that time period. For example, many newspaper advertisements during the 1930s boasted Northern Lights’ “fireproof” and “modern” cabins with heating and bathing systems for guests. These amenities seem basic now, yet back then they would have been a great draw.

During the 1940s, specifically during World War II, the resort displayed its patriotism by having a “Deluxe Victory Dinner,” which included fresh fruit, choice of chicken, steak or fish, potatoes, chef’s salad, and desert. Meals like that would continue to be featured in advertisements for the resort in the 1950s along with an emphasis toward families with young children. “Give mother a workles 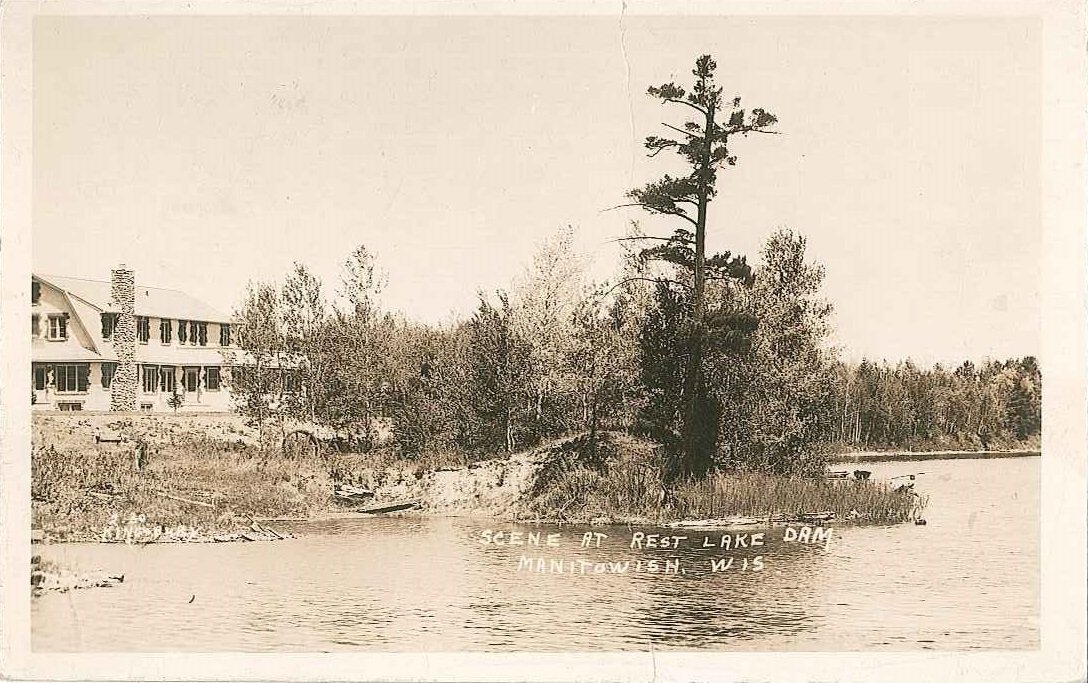 s holiday too!” shouts an advertisement from the St. Louis Post-Dispatch from 1953. “Sandy bathing beach safe for children!” exclaims the advertisement in the Manitowish Chamber of Commerce Booklet of 1952. As America entered the baby boom generation, family vacations and road trips became the staple of summer.

Regardless of the decade, the Northern Lights Resort consistently flaunted the Manitowish chain’s exceptional fishing. An advertisement from the Racine Journal Times in 1931 states, “Finest Muskie Waters in Wisconsin” as others state the abundance of muskie, bass, walleye, pike, and trout for visitors to fish. In fact, Manitowish Waters hosted a Muskie Marathon in 1952 with the first muskie prize being a one-week free vacation at Northern Lights Resort.

All of these amenities and advertisements came from ownership that changed hands, but never lessened the quality of care being 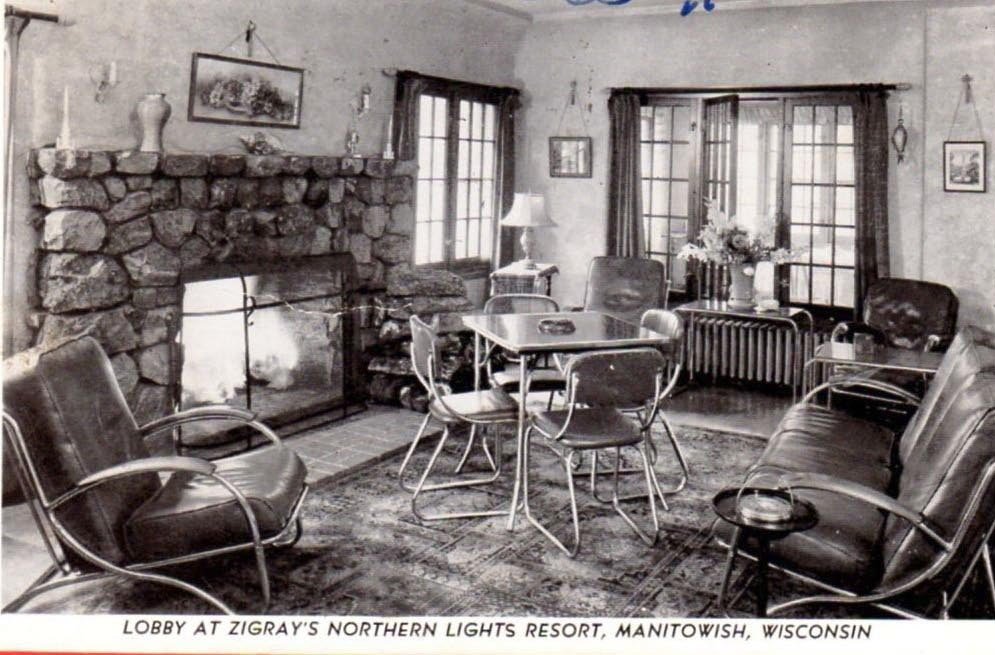 provided. The resort was originally run by Otto H. Oestreich, who was born in Milwaukee in 1893. He was a mason and building contractor in Milwaukee before moving to Manitowish Waters where he ran the Northern Lights resort for some years. The resort at this time was one main lodge with a dining room, 10 bedrooms, and a bathroom with hot and cold running water. The resort grounds also included eight cabins around the main lodge.

Next, the resort was owned and operated by Henry A. Kuhnert and his wife Sophie. Henry was born in Caledonia, Wisconsin in 1873. In 1927, he purchased about 57 acres of land around Kathan Lake in Oneida County for a five log cabin resort. Sometime between then and 1931, he sold that property and purchased the Northern Lights Resort. The earliest mention of the resort is an advertisement from 1931. Kuhnert was a part of the Manitowish Waters community, working as a local guide and chairman of a committee that handled the local fish hatchery in 1935. Also of note was Kuhnert’s run-in with John Dillinger’s gang whose member, Tommy Carroll, stole Kuhnert’s Packard sedan on the night in 1934 when the gang had a shootout with federal authorities at the Little Bohemia Lodge.

Evidence suggests that around 1940 ownership of the resort shifted to  Albert and Ida Zigray, and the name of the resort was branded Zigray’s Northern Lights Resort. According to the Rhinelander Daily News in 1958, “Zigray said he sold the resort two years ago after operating it for about 15 years and moved to Florida.” This information would put the ownership change at 1940 and Zigray closing the resort around 1956. Also, an advertisement in the Ironwood Daily Globe touts Zigray’s Northern Lights “Our Ninth Season” in 1949.

The last chapter for this vacation destination ends in 1958, as it is the last 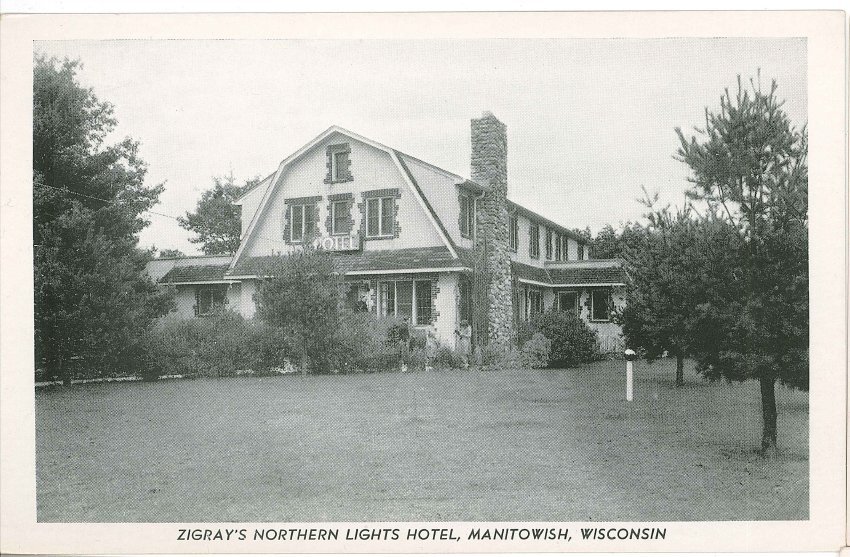 mention of the resort. In 1958, newspapers reported the former Assembly Speaker Mark Catlin Jr. was granted a beer and liquor license for the Northern Lights Resort. The reports say that Catlin, an attorney from Appleton and friend of Zigray’s, had leased the resort from Zigray, who could not hold a liquor license due to his residency being in Florida. However, what became of the resort after that is unclear as this story in the Rhinelander Daily News reports in 1958, “Catlin will not operate the resort. Zigray said that he would manage it and a bartender would be hired.”

The resort business on Rest Lake was always competitive. Owners had to know how to sell the experience of a vacation on the Manitowish chain of lakes and then deliver that experience. Given the Northern Lights Resort’s reputation and longevity, it is clear that this resort, and its owners, was successful in bringing out the best the Northwoods has to offer.

Other Resorts at this locations since being founded in 1931