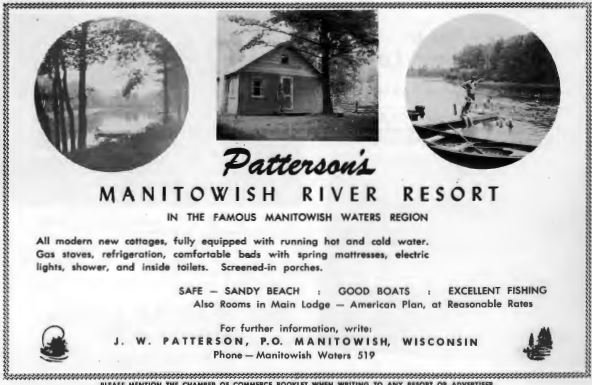 Along the banks of the Manitowish River on Bensen Lake, J.W. Patterson’s Manitowish River Resort was in operation from 1946 until 1961. Tax Records from Manitowish Water’s archive state that Patterson owned two boats, suggesting the resort was smaller than active nearby resorts such as Tichy’s Knotty Pine and Jones’ Lakewood Lodge.

This resort was advertised in the Chicago Tribune. It was told that those who found this place would have fun, rest and great fishing. There was a lodge with rooms and cottages, and the resort ran on the American Plan. The cuisine was considered just plain good old fashioned home cooking. The Patterson family would close down the resort each fall and return to their home in Chicago.

Other Resorts at this locations since being founded in 1946