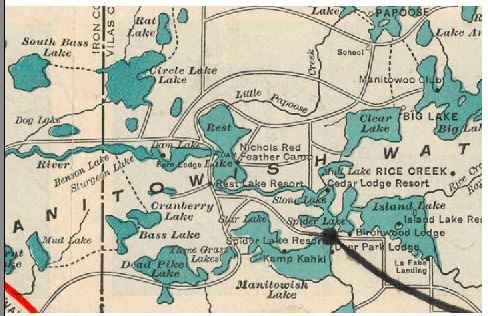 Ethel Powell’s Fern Lodge was unique to Manitowish Waters as the only State Forest Reserve Lease resort. Using the forest state lease program, Powell could operate her resort for as little as $25 a year. Improvements on the property had to follow state guidelines, and Powell was responsible for all building and maintenance on the property.

This lodge remains a bit of a mystery, but in 1916 and 1926, Poole maps from the Wisconsin Historical Society Collections clearly illustrate the location and existence of Fern Lodge. 1928 Town records also identify the Powells running a resort on Vance Lake. Fern Lodge also appeared in a circa 1936 promotional map and brochure of Manitowish Waters, offering both American Plan and House Keeping accommodations. Ethel Powell passed away in 1944, which seemingly marked the end of Fern Lodge’s operations.

In October of 2004, famed MW historian Michael Dunn recalled: “…a lady named Ethel Powell ran a little American plan resort, a very humble one, and after her death an auction marked the end of her little business. Afterwards, the state turned part of the property into camping sites. The period when the old women had the resort would have come to its end in the late Thirties or early Forties, and apparently the closing came suddenly when she took ill or died. Her resort was named Fern Lodge.” 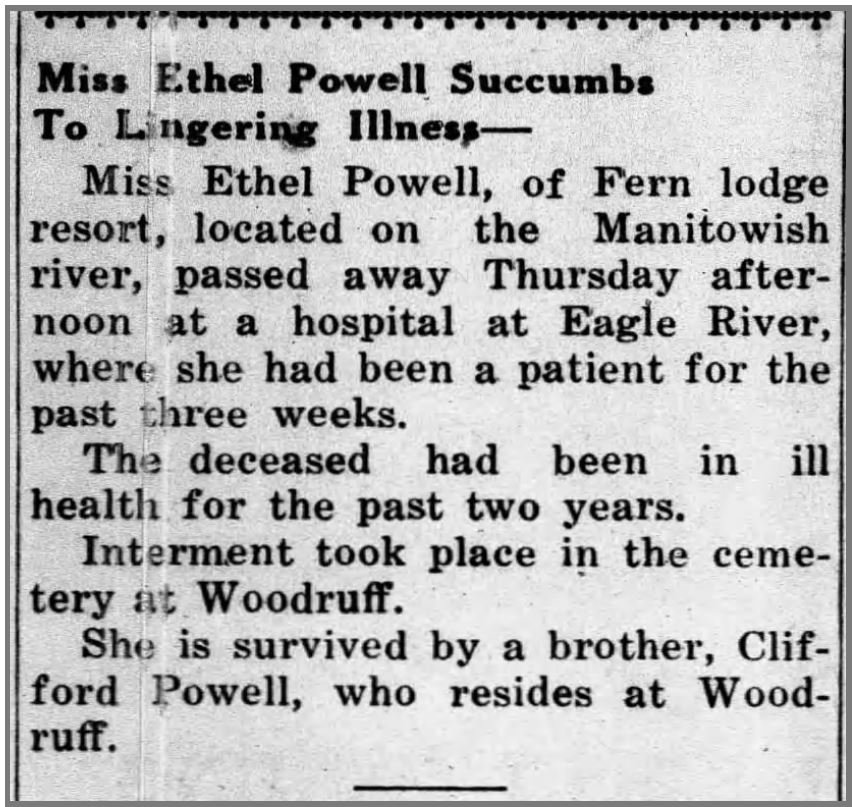 Today, the site of Fern Lodge is on a spur trail of the North Lakeland Discovery Center’s Manitowish River Loop trail. An old foundation just before the DNR campsite picnic table, some day lilies and lilac trees are the only remnants of Fern Lodge. Into the 1950s, a boat landing was maintained just north of Fern Lodge and likely served as the access point to Vance Lake for the resort, too. In the 1957 MW Chamber Guide, the old Fern Lodge property was listed as Vance Lake camp sites and state owned.

The road leading to Fern Lodge was originally built to access an old river drive logging animal yard that supported the logging efforts of the Mississippi River Logging Co. and the Chippewa Lumber and Boom Co., both of which were located at the lower parking lot of the Pea Patch next to Rest Lake Dam.

A short hike from the bike trail will lead you to the DNR canoe campsite on Vance Lake and the former site of Fern Lodge. The hike is not to be missed. Moving east through the forest canopy toward the Manitowish River, you will encounter large red and white pines, and some maturing hardwoods. The view from the terrace of land that supported Fern Lodge is lovely, and informed hikers sometimes bring appetizers and drinks to enjoy at the DNR picnic table.

Cheers to Ethel Powell, who ran her business for at least 28 years on Vance Lake!

Other Resorts at this locations since being founded in c1916