The past can often fall into three categories in the Manitowish Waters region. The first is simple: the history is gone from the landscape. Time moves on, resorts and old buildings are replaced, and all that remains are old photographs and newspaper clippings. Sometimes the past can remain how it was with few changes, like Little Bohemia and Voss’s Resort. It can also fall somewhere in the middle, with the past being built on top of or altered slightly.

This third category is where the Rest Haven resort would be placed. The Rest Haven resort has gone by many names like Rudy’s Rest Haven, Ehrich’s Bavarian Inn, Swanberg’s Bavarian Inn, Parkside Tavern and now Allswell, opening in 2022. It is a location where we can still see the “bones” of history, with updates and changes built on top; modern restaurant aesthetics that pay homage to the resorts of the past. 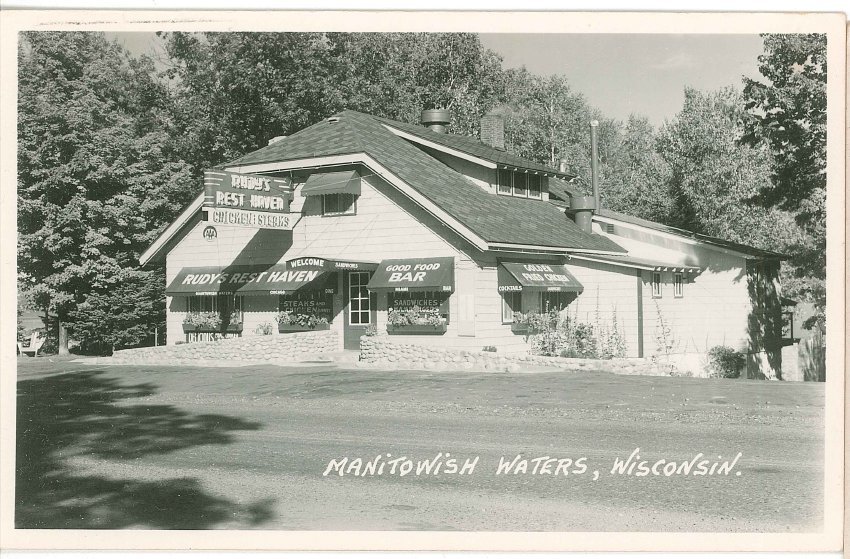 The Rest Haven resort has been around, in some form or another, for so long due in part to its geographic location in the region. Located on County Road W off Highway 51 and in the town of Manitowish Waters, this resort has been a destination for vacationers dating back to around 1925. The original resort in this location came around 1925-1926 under the ownership of Mr. and Mrs. Louis Shroeder. The resort was aptly named Schroeder’s Resthaven and was located roughly in the area that is Allswell and Koller Park now.

The resort really came into prominence in 1943 when Rudy and Garnet List bought the property and rebranded the resort as Rudy’s Rest Haven. The List’s owned the resort from 1943 to 1966 when Rudy’s health worsened, and the couple relocated to Key Largo, Florida.

Rudy’s Rest Haven became a highlight of the resorts and local community. The resort was known as “The House of Good Food,” with Garnet running the kitchen and Rudy tending the very popular bar that complemented the restaurant. People came to the bar for food and drinks, or perhaps to see the famous talking “Joe the Mynah Bird” who would greet customers at the door. From advertisements, it seems like Rudy’s Rest Haven prided itself in its restaurant and bar. For example, in 1951, winners of a local muskie competition were awarded a “dinner for two at Rudy’s Rest Haven.” The resort also had several cabins along “W” and Ilg Road, a beachfront and docks, and one gasoline pump. 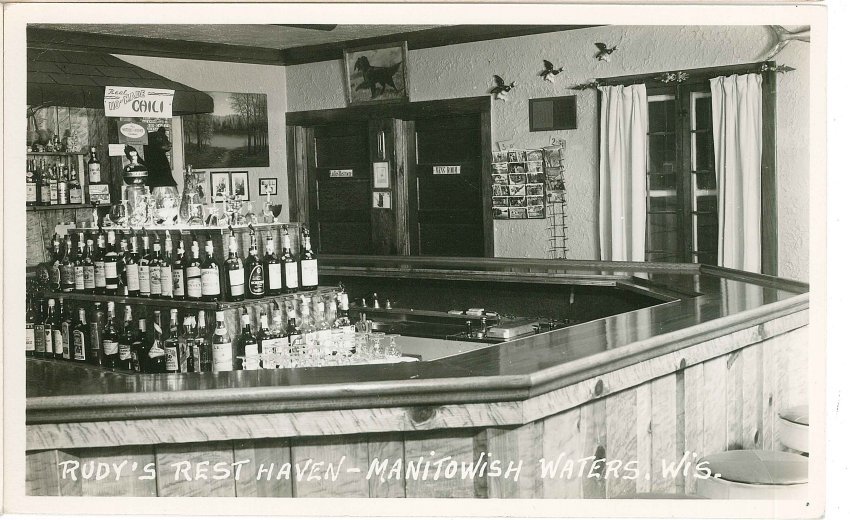 In 1970, Bill and Rita Ehrich purchased the resort and renamed it The Rest Haven, then a few years later to the Ehrich’s Bavarian Inn. Bill was a U.S. Navy veteran of the Korean War and ran the resort with Rita for over 20 years. The name was changed to fit the new German-inspired menu. An Ironwood Daily Globe advertisement from 1971 reads “Bavarian Specialities like sauerbraten, wienerschnitzel, etc. Imported German beers and wines.” The restaurant was open year-round, advertising for road trips in the summer and snowmobile adventures in the winter. The Ehrich’s sold the property in 1991 and both passed away in 2009, months a part.

Between 1991 and 2006, Eileen and Greg Swanberg owned and operated Swanberg’s Bavarian Inn. The Swanberg’s continued the success and good reputation of the previous owners as evidenced in 1998 and 2001 when the Wisconsin Restaurant Association Northwoods Chapter awarded the Swanberg’s the Outstanding Restaurateurs of the Year.

The modern iteration of this property as Parkside Inn seemed to emulate the past. But the restaurant moving forward as Allswell will move into that first category as the building is currently gutted and appears that it will take on a completely new look, within the long-standing structure.

While the resort has faded away in favor of the public park and waterfront, the reputation for good food and drinks hopes to live on within the framework of the same building that has been a part of Manitowish Waters history for the better part of a century.

Other Resorts at this locations since being founded in 1925