Annette Tellefson spent summers in the Northwoods with her two daughters, Renee and DeEtte, helping her parents run Lor-Wood Resort. Annette was a school teacher in Middleton, WI, and Renee recalls how they packed the car full of their summer belongings the night before the last day of school. DeEtte exclaimed, “As soon as school was over, we were on the road heading north!” By 1969, with Annette’s father eight years gone and her mother no longer able to run the resort on her own, Annette moved the family north to take over the resort and work at the Manitowish Waters Grade School.

By 1973, Annette sold three cabins on the west side of the property and replaced the older main home with a Wausau Home. Renee recalls the excitement of moving to the Northwoods. “We didn’t have many friends in the area because most of our free time involved playing with the guest’s children at the resort.” Renee fondly remembers playing cards or reading comic books in the cabins with the guest’s children until late at night, or venturing into the nearby forest that bordered the property to play games. Renee and DeEtte pointed out that this is what made their resort special for many families. “Many of the same families returned year after year, so we became very close with them.” 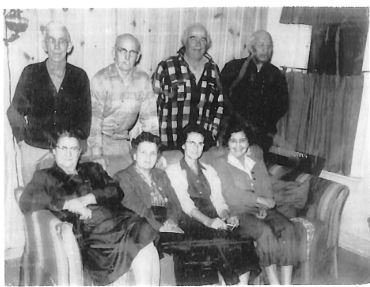 Making Friends in the Northwoods

While running a resort in the Northwoods was no easy feat, Annette had capable help. Annette’s mother, Evelyn, stayed on the property, eventually remodeling one of the cabins for her own year-round home. Additionally, Renee and DeEtte did much of the physical labor. They explained that each cabin was rented from Saturday to Saturday. At the height of the season, it was not unusual for all seven cabins to be rented. Consequently, the girls remember scrambling from cabin to cabin trying to get them cleaned before the next week’s guests arrived. Renee commented, “my mother was picky too. She would inspect every cabin making sure every corner was spotless.” Renee also remembers the days it would rain. “As soon as it stopped, we were down at the lake with buckets emptying the boats of water.” Reflecting on their childhood experiences, they concluded, “the three of us did a lot – cabin repairs, raking, cleaning, and even running a chainsaw. We always had summer jobs in the area, too. We were always busy, but that is all we knew, so it did not seem like a big deal at the time.”

After 50 summers, Lor – Wood Resort was closed in September 2017. Annette passed away in 2019. While Renee and DeEtte did not continue running the resort, they took ownership of three of the cabins and the main house. Despite the property having a little less action than in days past, the small cabins, pristine views, and beautiful beach are still present. The family treasures their time there.