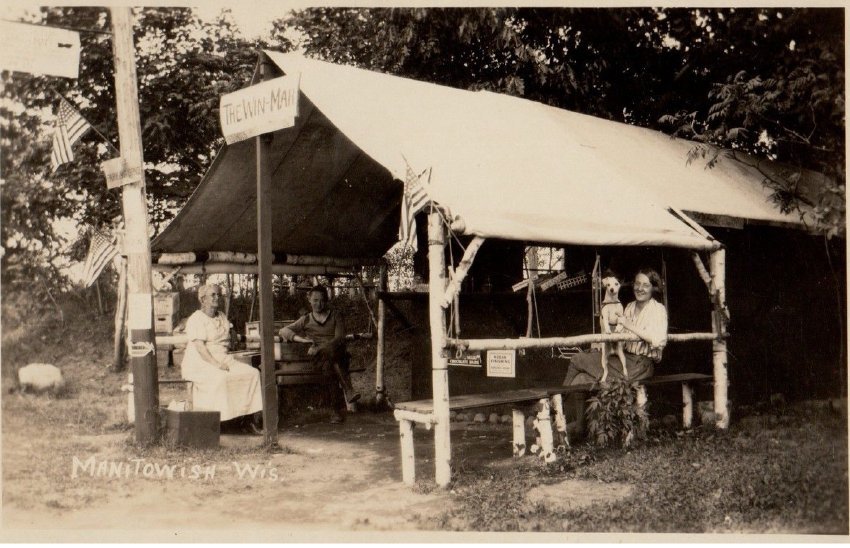 In 1922, the Win-Mar opened under the ownership of Marie Zimmerman and Winifred (Winnie) Johnson Young. The business started out as a supply post building, measuring 8’ by 8’ and made of canvas and birch poles used to support the canvas roof. Over the years, Win-Mar expanded into a resort with cottages, a restaurant with a dining hall, a gas station, a grocery supply, and a boat livery. It began as a lake side/roadside stand and evolved into a full-service resort. They were known for their great food and hospitality. They advertised their hamburgers as one of their best specialties.

In 1928, Winnie and Marie and the Wisconsin Automobile Insurance Company sued Frank Milavetz over a car collision between Winnie and Milavetz. The crash happened between Mercer and Manitowish. Winnie was awarded $1,117 for property damages and $256 for personal injuries. This award may have helped with improvements on the resort. By 1934, the resort was still expanding, and ads for waitresses and hired hands are seen yearly. 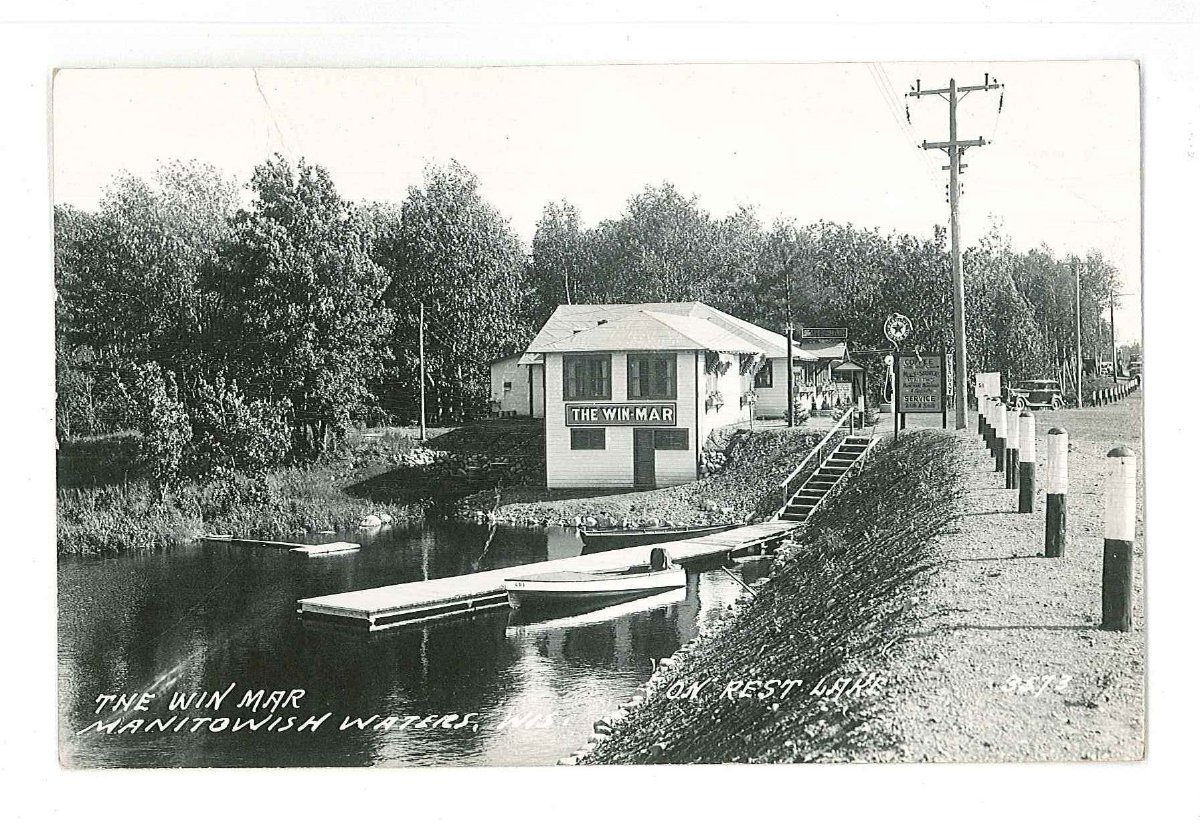 Tragedy struck in 1934 when Steve Smith, an employee of the Win-Mar store and restaurant, drowned after his canoe capsized by the Rest Lake Dam. He was standing in the canoe on his approach to the Win-Mar landing when the canoe capsized. Several local men and 20 members of the CCC Camp Mercer 660 helped the Mercer Fire Department search for the young man.

By 1935, what was known as the Win-Mar sandwich shop had been expanded to a new dining room that overlooked the lake. The new dining room was large enough to have live music and dance parties. By the early 1940s, Marie and Winnie were spending their winter months in either Florida or California. Ads in The Chicago Tribune in the 1940s described clean home-like housekeeping cabins with electric lights and gas stoves. The resort ad also highlights proximity to stores, train and bus service.

Tragedy again struck in the 1940s. In 1944, Marie had not been feeling well and suffered a heart attack that was serious enough for her to be hospitalized in

Rhinelander. At the end of March 1945, the Win-Mar main structure was destroyed by fire. The lady proprietors were awakened around 4 a.m. and were able to escape from the fire. A new stock of items for the tourist season and all else were lost in the fire. The damage was estimated at $15,000 with only partial insurance coverage. The fire truck was dispatched from the Mercer Ranger Station and rushed to the scene, and upon arrival, only the icehouse could be saved. 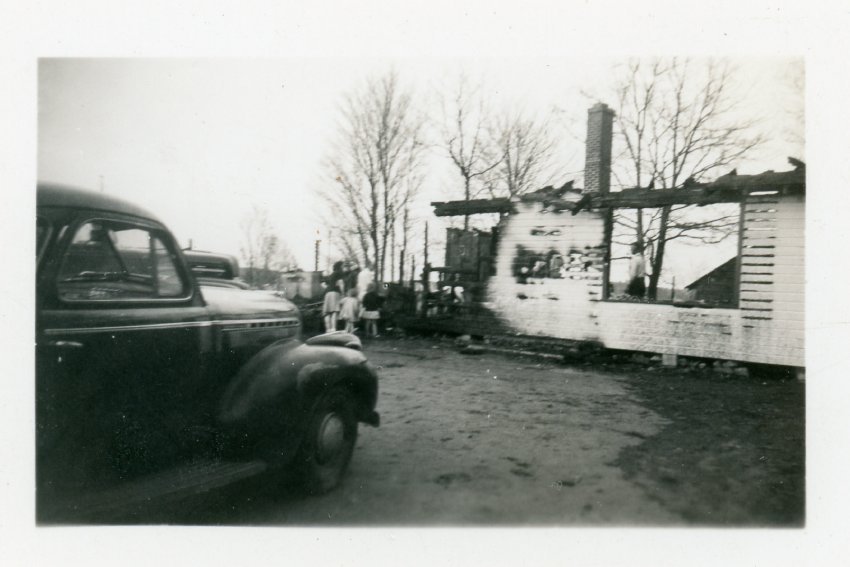 After the Win-Mar fire, the property was rebuilt across the road on the west side of the dam

In 1954, it is interesting to note that in an Evansville, Indiana newspaper travel log article of where to stay in Wisconsin, the two resorts mentioned in Manitowish Waters were Voss’ Resort and the Win-Mar. By 1955, Winnie and Marie sold the Win-Mar to Richard C. Hill of Milwaukee. Hill changed the name to the Blue Spruce Resort and promised a carefree vacation in beautiful Manitowish Waters. He warned that spring was the time to book for the best accommodations.

Charley and Inez had met in Memphis, Tennessee while he was stationed nearby with the Navy. They would wait to marry until after World War II. In 1942, Charley was on the aircraft carrier Lexington when it sank from torpedo hits in the Coral Sea. He was lucky as he was retrieved from the water by a destroyer.

Charley was a native of Oklahoma, and Inez was from Mississippi. Charley had just retired from the Navy and wanted a second career. He had heard about the possibility of owning the Blue Spruce from his brother-in-law who worked at Little Star Garage. Charley and Inez bought the resort and tavern without having ever seen it. It must have been quite an experience to come to town right as an April blizzard dumped snow on their new purchase.

Neither had ever served a drink and knew little about running a bar and resort. Inez said that they read lots of books, trying to figure out bartending and resort care. Charley remembered the first time a customer asked for a “screwdriver,” and he went right to his tool chest and got him one. They hired Jerry Wonderling as bartender, and he taught them the ropes.

They rented out seven cottages and did all the work themselves. For meals, they began serving ham sandwiches, then hamburgers, and later added pizza. A 1962 ad describes the modern housekeeping cottages with innerspring mattresses, gas heat, and reasonable rates. Fishing was considered fine.

They renamed the place the Pea Patch Resort and Tavern and declared that their resort had “the best fishing in Northern Wisconsin by a Dam Site.” They were active community members and loved the Northwoods. Charley was a member of the Manitowish Waters Fire Department for 25 years and became an EMT. They were members of Our Lady Queen of Peace Catholic Church, and Inez always raised money for the Eagle River Cancer Society.

By the late 1970s, they began to dream of moving to Mississippi to be close to Inez’ family. They sold the tavern in 1978 and the cabins in 1979. Six of the seven cabins were torn down by the early 1980s.

The Pea Patch was leased by Carol McClellan’s mother and sister. For a short period of time, it was known as Fast Eddy’s. 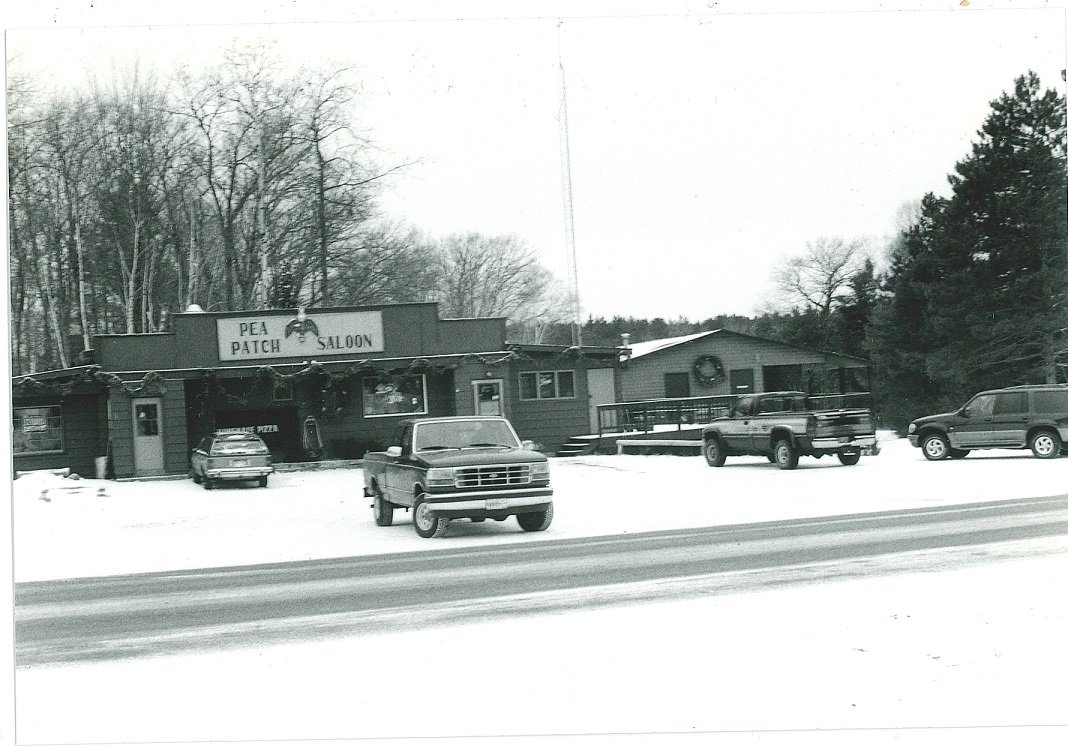 Jerry and Judi Schmidt moved to Manitowish Waters, and Judi worked in real estate for Ed Hunter in Boulder Junction during the summer of 1982. She opened her own real estate office in late 1982. They purchased the Pea Patch and turned the living quarters into a real estate office. In 1984, Judi established Schmidt Haus Reality.

At first, Judi and Jerry worked the bar by themselves. Judi met a lot of real estate customers over that bar. They ran the Pea Patch as a full-service restaurant, and they coined the slogan “The best hamburgers sold on a Dam Site.” On Saturdays, they served salted shelled peanuts, and everyone threw the shells on the floor. Other nights, free appetizers were served to the joy of their customers.

They had three managers over the years: Gary Wallschlager, Kurt Potter and Judi’s sister Patti Norman, who became known as “Pea Patch Patti.”  Patti was a barber in Madison prior to moving to Manitowish Waters. She brought her barber chair to the Pea Patch and gave haircuts to customers in the bar room. She was also remembered for serving “Upside Down Margaritas” in the barber chair.

For many years, during the opening of fishing season, a group of fishermen from the  Sheboygan area would stay at the Pea Patch and take over the place. On Friday, the kitchen was turned over to them, and they made a fish fry with their catch and served a free fish dinner to the customers.

Unfortunately, Jerry was killed in an automobile accident in February, 1986.  Judi would later marry Bud Arnold, and Judi and Bud built the motel at the Pea Patch. A 2004 article in The Los Angeles Times stated that the Pea Patch Motel and Saloon accommodates tourist with 11 motel rooms and kitchenettes with doubles for $48.00. 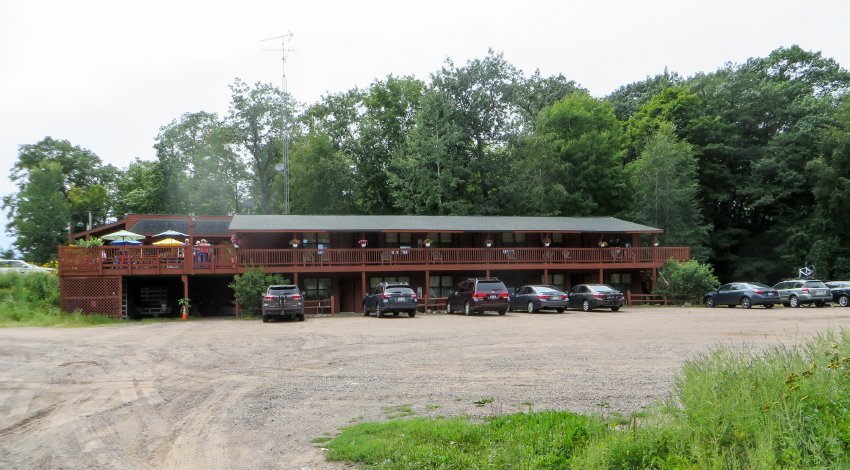 Judi and Bud spent their winters in Florida, and in the winter of 1996-97, they received a call from Barry and Lisa (LaPorte) Hopkins, asking if they were interested in selling the Pea Patch. Judi and Bud talked it over, decided that the Hopkins would run an excellent bar, and the rest is history.

Today, the Pea Patch is an outstanding business with great hospitality, quality food, and owners who contribute so much to the community. Throughout the years, Barry and Lisa have created wonderful activities at the bar as well as in the community. Music in the Park was established by Lisa and Barry, and has become one of the most popular Sunday activities in Manitowish Waters and the surrounding area as people travel from neighboring towns to attend. Their generosity and concern for the community has enriched many lives.

Other Resorts at this locations since being founded in 1922